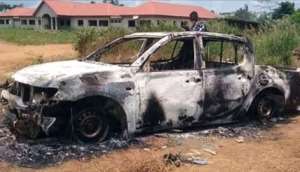 One person has reportedly been killed with two others in critical condition following clashes between some supporters of the governing New Patriotic Party (NPP) and the opposition National Democratic Congress (NDC) at Nkrankwanta in the Dormaa West District of the Bono Region.

According to Daily Graphic , the two affected persons have been receiving treatment at the Dormaa Presbyterian Hospital but one of them identified only as Kofi Labatu was pronounced dead on arrival.

A video of the incident sighted by the Citi News showed that a vehicle and some motorbikes were torched in the process.

It is unclear what started the confusion that led to the violent clashes.

Meanwhile, Police reinforcement was quickly dispatched from the Bono Regional Police Command to the district to ensure that peace and order was restored.

This incident comes to joint the list of several violent incidents that witnessed during the Electoral Commission’s just ended voter registration exercise.