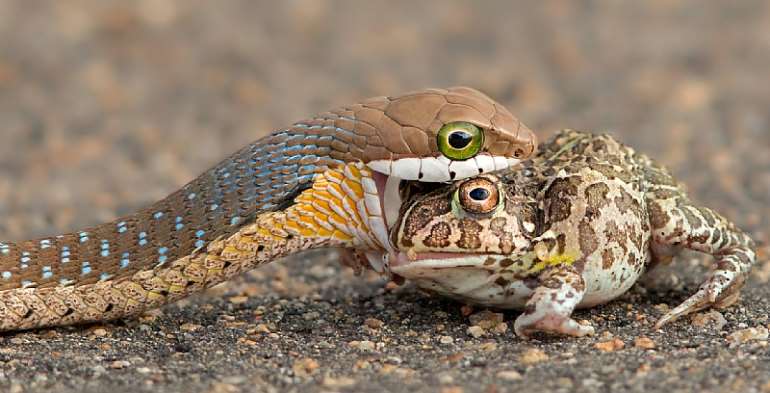 Snakes are a diverse lineage of reptiles that are found on every continent except Antarctica. Despite differences in appearance, habitat preference, defence tactics and underlying biology, one thing is common to all 3,800 species of snakes — every last one is a predator.

As predators, snakes are likely to fulfil important roles in ecosystems. Knowing what snakes eat can help scientists better understand ecological connections among snakes and other species. This will lead to a better understanding of how ecosystems function and how ecological communities might be affected by changes in habitat or climate.

Incidents of snake bites on people prompted the World Health Organisation to declare snakebite a neglected tropical disease in 2017. Given the link between venom biochemistry and feeding, a detailed understanding of a species' diet can inform research dedicated to mitigating the effects of snakebite.

Unfortunately, the details of many African snake diets remain a mystery. Historically, information on snake diets has come from dissecting preserved museum specimens or fortuitous observations of snake feeding that are published as brief notes in journals or newsletters .

More recently, methods for studying snake feeding habits have embraced technology. These include fixed videography studies of ambush predators like puff adders and timber rattlesnakes , as well as DNA analysis of faecal material from smooth snakes . But these approaches cannot be used for many snake species, and they require a significant amount of time, effort, and resources.

Snake diets can be difficult to study, so, in 2015 we realised that photographs and videos of snakes feeding were being shared regularly on Facebook. We set out to gather these observations using a dedicated Facebook group – Predation Records – Reptiles and Frogs (Sub-Saharan Africa) – and to record the shared observations systematically. Our findings showcase how the network of active users on Facebook can help us to collect ecological data quickly and cheaply.

After several years of community participation in our study , we turned more than 1,900 observations of reptiles or amphibians eating or being eaten into scientific data. Our database includes 83 families of predators and 129 families of prey.

For snakes, we gathered more than 1,100 feeding records. We soon saw that social media had helped gather these feeding records faster than ever before. The data collected from Facebook represent 27% of scientifically documented snake feeding records in southern Africa. More than 70% of all feeding records had not been recorded previously in the scientific literature. A boomslang eating woodpecker chick. Provided by author/ L Van Wyk

To find out how data from social media compared to data collected using other platforms, we used iNaturalist (a popular citizen science platform) and Google Images to find observations of feeding snakes. Facebook outperformed both platforms in terms of the overall number of observations collected.

Finally, we noticed that observations collected from the different platforms produced different prey profiles, suggesting that certain prey may be over - or underrepresented in studies depending on the source of the observation.

Nearly all methods used for studying snake diets have biases. This may be why there are striking difference between what social media and the existing scientific literature revealed.

Facebook also let us identify prey more precisely. Most of the prey was photographed while being eaten or after regurgitation. On the other hand, prey collected from the stomachs of museum specimens are often partially digested, making the identification process difficult.

Our findings highlight the remarkable power of citizen science to reveal undocumented details about the natural world. In the case of snake diets, specifically, it is the harnessing of thousands of social media users that facilitated the data collection.

This is mainly because snakes feed secretively and relatively infrequently in the wild. But social media and the widespread use of smartphones with cameras means that even difficult to observe events can now be recorded in large numbers and across different geographic areas.

The continued detection of new feeding interactions shows how there is much to be learned about these remarkable animals. As more observations are made, the full picture of a species' diet will be revealed. By using a community of observers, more data and information can be gathered for little to no cost.

While our study was restricted to southern Africa, expanding data collection efforts like this into the rest of Africa is necessary. Given that Africa experiences some of the world's heaviest snakebite burden , details on the biology of its snakes will prove useful. If ever there was an opportunity to gather novel, important ecological information about snakes in Africa, this is it.

Globally, there are hundreds of groups on Facebook – some of which have close to 200,000 members – dedicated to sharing original photographs and observations of snakes. More generally, Facebook groups exist for most classes of animals and plants, and these communities have unprecedented observational power for researchers asking appropriate questions of the natural world.

Bryan Maritz receives funding from the National Research Foundation, and is a committee member of the Herpetological Association of Africa.

Robin Maritz does not work for, consult, own shares in or receive funding from any company or organization that would benefit from this article, and has disclosed no relevant affiliations beyond their academic appointment.

By Bryan Maritz, Senior Lecturer, Biodiversity and Conservation Biology, University of the Western Cape And