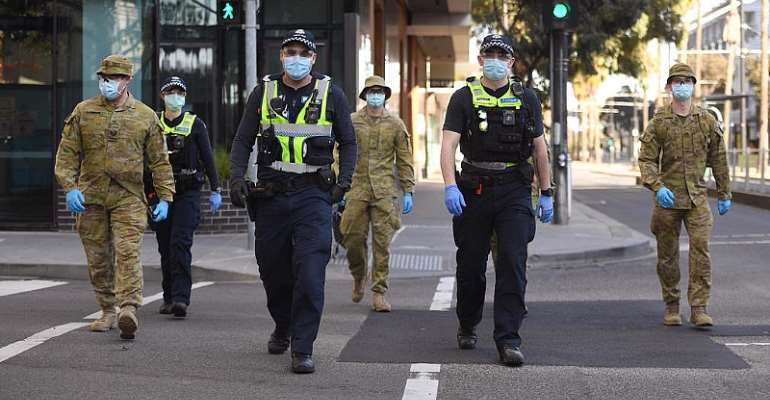 The Australian state of Victoria says it will impose heavier fines on residents who flout Covid-19 lockdown rules, which have now been extended until September in the state capital Melbourne as the authorities attempt to tackle an alarming rise in the number of cases.

Residents of Melbourne, Australia's second biggest city, are living under curfew. Since Sunday, only trips to or from work are permitted between 20:00 and 5AM.

As hundreds of new coronavirus cases are recorded every day, Melbourne also faces the closure of non-essential businesses, and mandatory mask-wearing.

State Premier Daniel Andrews reacted angrily to reports that around 800 infected people had not been at home when local authorities carried out door-to-door checks.

"It's completely unacceptable," he said, warning that people infected with Covid-19 could now face on-the-spot fines of up to 5,000 Australian dollars, about 3,000 euros, up from 1,652 dollars, if they are caught breaching quarantine a second time.

Victoria has recorded more than 12,000 of the 19,000 coronavirus cases reported across Australia, as well as 147 fatalities of the country's total of 232.

After Victoria state recorded 671 further cases and seven deaths on Sunday, Andrews announced a “state of disaster” and promised sweeping new Covid restrictions across the state as of 6 August.

It has been mandatory for people in metropolitan Melbourne to wear face coverings in public since midnight on Wednesday 22 July.

That rule has been extended to the entire state since midnight Sunday 2 August.

The new 'stage 4' lockdown rules for Melbourne will be enforced for the next six weeks until 13 September, while the rest of the state will remain in stage three.

Residents are allowed to go out for medical care, to care for others, to get food supplies, or go to work. One hour of exercise per day is tolerated within a 5 kilometre radius of a person's home.

All non-necessary shops, bars and restaurants will be ordered to close as of Thursday, except those offering delivery and contact-less services.

Travel within the state is permitted but only for necessary work-related reasons, or caregiving.

"It's an atmosphere of fatigue. We were so close to pulling through, and able to do things again little by little," a Brazilian resident Suellen Smosinski told RFI.

“Where did we go wrong?” she asks, “the current situation is much worse than at the beginning. Victoria has never had so many cases, we're beating the records.”

Suellen has worked in communications for the past five years but lost her job with a university centre for foreign students when the pandemic hit.

“Everything is so uncertain. In another six weeks, even more people will have lost their jobs and those already unemployed will have even more trouble trying to find jobs.”

Army to provide support for police

Victoria police commissioner Shane Patton said hundreds of officers were also on the streets to enforce the curfew, mask-wearing and stay-at-home orders.

An additional 500 troops will also be deployed in Melbourne to help health officials go door-to-door checking on people who should be staying at home, Premier Andrews said.

Police can also take serious rule-breakers to court, where fines of up to 20,000 Australian dollars (12,000 euros) can be imposed.

Patton said police had observed a small but emerging trend of so-called "sovereign citizens", who believe the laws do not apply to them and were consistently flouting the rules and in some cases reacting violently towards police.

"We've seen them at checkpoints baiting police, not providing a name and address," Patton told The Guardian newspaper.

"On at least four occasions in the last week, we've had to smash the windows of cars and pull people out to provide details."