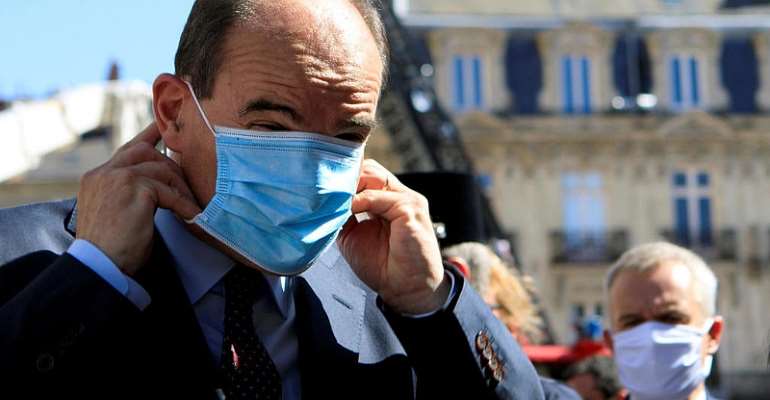 Jean Castex has called on France "not to let down its guard" in the fight against the coronavirus in order to prevent the need for a new national lockdown, as concern grows over a recent surge in cases, notably across the north of the country.

Speaking this Monday in the northern city of Lille, the premier said, "The virus has not gone on holiday and neither have we.

"We need to protect ourselves against this virus, without putting a stop to our economic and social life, in other words avoiding the risk of a new generalised lockdown."

France, which has registered over 30,000 deaths from the Covid-19 pandemic, recorded thousands of new cases last week prompting some regions to reimpose local restrictions.

"We are seeing an increase in the figures for the epidemic which should make us more attentive than ever, and this is the case," Castex said.

"I call on every French person to remain very vigilant. The fight against the virus depends of course on the state, local communities, institutions, but also on each of us," he added.

Masks compusory in some public areas
The city of Lille, a bustling hub close to the Belgian border, has been the subject of particular concern with the prevalence of the virus doubling to 38 people per 100,000 people over the last two weeks.

In parts of the city it is now obligatory to wear masks outside to limit the contagion, a move that local authorities can now impose themselves.

As well as in Lille, outdoor mask wearing is now obligatory in parts of the northern region of Mayenne, as well as the popular coastal summer tourist destinations of Biarritz, Saint-Malo and Le Touquet.

The French government has been determined to encourage citizens to go on holiday this year, especially within the country, in the hope of giving some help to an economy that contracted by almost 14% in the second quarter of 2020.

But officials are keenly aware that the opening up brings risks and the government has been troubled by scenes especially of young people partying at close quarters outdoors in holiday spots.

Meawnhile, the European Commission said on Friday it had signed a contract for SAP and Deutsche Telekom to build a software platform that would enable national coronavirus contact tracing apps to 'talk' to each other.

The hope is that creating the gateway would help slow the spread of Covid-19 by making it possible to log encounters between people while they are travelling abroad and issue push warnings should one of them be infected.

The two companies, designers of Germany's Corona-Warn-App which has been downloaded 16 million times, proposed creating the gateway in June, when EU member states agreed on a framework to make the apps interoperable.

Germany, Ireland, Italy, Latvia and Poland - have launched apps based on a technology standard developed by Alphabet's Google and Apple.

Another nine countries plan similar apps that will use this "decentralised" design, where phones that come into close contact share random identifiers and receive risk notifications if a contact later tests positive for Covid-19.

The common design means these apps are compatible and could easily be plugged into the gateway.

However, experts say it will be more challenging to hook up the French and Hungarian apps, which store data on central servers.

France's Stop Covid app, which was launched in June, has been critiscised for being inefficient in tracking the spread of coronavirus, too expensive to develop and mainly ignored by the French with only 3% of the population having downloaded the application.