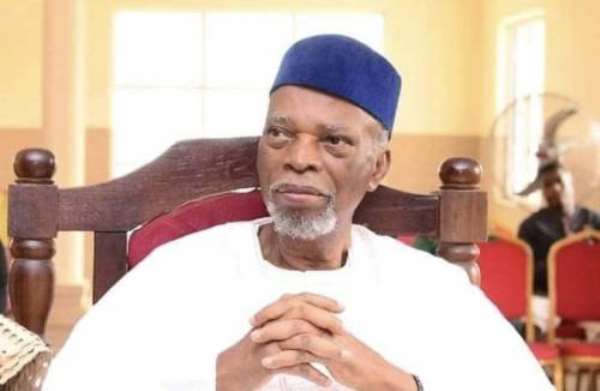 Wole Olanipekun! Remember him? Yes! Everybody talks about him in glowing terms: he is gifted and God-fearing. As a matter of fact, everybody marvels at how the accomplished technocrat, who rose to the pinnacle of his career as Senior Advocate of Nigeria (SAN) about three decades ago, is able to navigate between different camps without hurting them. Still, he gains their confidence! That, of course, speaks to the hallmark of the character of a man.

Recently, Olanipekun wrote a beautiful Tribute to Evangelist Bamidele Olumilua, who died on June 4. In the eulogy, published in The Nation, July 8, 2020, the legal practitioner detailed what the late politician and former governor of the old Ondo State did as well as what he did not do while he lived! Well, it’s a good thing that the former president of the Nigerian Bar Association (NBA) put those things on record, if only to serve as motivation for those who will venture to serve in public space in the nearest future.

Without doubt, Olumilua has contributed his quota. Posterity will now be the fair judge! Similarly, Olanipekun has, by that singular act, helped in putting to Nigerians’ psyche what it means to serve diligently. Apart from refreshing the people’s minds about what “the brilliant, witty, cerebral, profound, suave, civilized and cosmopolitan” politician stood for, it will also serve as a reference point for generations yet unborn. It was so lovely, well-written and timely! However, while it takes a great man to acknowledge another person as great, part of our predicament as Nigerians is that we forget people and their deeds, so easily. Here, it is not part of our culture to remember the contributions of our heroes past to nation building. In civilized climes, things like this are even taken for granted, simply because they have National Libraries, archives and other places where one can go and find out about people. Had we imbibed the culture of documenting people while in public service, appreciating deserving leaders would have helped to influence leadership selection in this country.

Well, this intervention is not so much about Olanipekun, the legal icon and former Attorney General and Commissioner for Justice of Ondo State. Instead, it is about Olumilua, the man with ‘mesmerizing niceties’, “an exemplar par excellence – a man and a half”, who “led by example and practised what he preached.” With Olanipekun’s rich account of Olumilua’s life and time, one is not in doubt of many lessons to be learnt. For instance, a man who described his “happiest day in life” as the day “the OMPADEC Decree was ratified by General Ibrahim Babangida” was a patriotic and an altruistic leader who never saw service from a personal point of view or as an avenue to covet and convert public till into personal use. That the late elder-statesman also extended “an olive branch” to Chief Aaron Komolafe and Chief Lawrence Agunbiade; even that “veteran trade unionist”, who eventually “applauded the governor’s large-heartedness and immediately called off a lingering industrial action”, showed a man whose “fidelity to … a common goal was legendary.”

Hear Olanipekun again: “after gleefully and voluntarily retiring from public service,” Olumilua “ventured into business, warehousing assorted merchandise in different parts of the present Southwestern States.” In the era where diplomats, when they end up, they still loiter around the corridors of power, seeking for more patronage, this career diplomat went into business! In the era where, after leaving office, politicians begin to beg for bread, less than three years after leaving office, simply because they never had a second address, this “man of purpose - a necessary existence, both in terms of form and substance” chose to be different! What then stops our ‘current champions’ and ‘leaders of tomorrow’ from going back to the lives of the likes of Olumilua?

Through Olanipekun’s Tribute, Nigerians also learnt that, for the four years that his campaigns lasted, “there was scarcely any town, village or hamlet” that Olumilua “did not visit twice.” Impliedly, the politician did not just sit down in one corner of his room, ignorantly expecting manna to fall from heaven; or arrogantly banking on some unessential powers to deliver victory to his doorstep. Instead, he sought to have “a clearer picture of the potentialities of” Ondo State “and the need to internally harness them for his developmental agenda.” Olumilua eventually got what he wanted and he delivered on his promises.

In all, Olanipekun’s paper touched on leadership selection in Nigeria. Unless, of course, the Nigerian state only exists in the abstract, power in this part of the world is about coming together of some few ‘smart ones’ for the purpose of sharing the national commonwealth. Apart from allegations of rigging and impositions, most times, those who also emerge as leaders are not those who have ever excelled in their chosen professions, talk less of achieving anything in life! Before our very eyes, a young boy who has just left school is already thinking of having all the millions in the world and keeping everything to himself. He has seen, and heard from the elders, how it is done. But, can we ask the young man to repent when the elders have not repented? These are the issues! They show how bad the country has degenerated!

Nigeria’s Minister of Transportation recently said something and it has kept a lot of Nigerians worried. There was a time in this country when Rotimi Amaechi was unemployed; as such, was poor. And he dived into politics. Look at him today! For the Minister to have confessed that he went into politics as a result of unemployment was a dangerous confession from a leader. It’s a careless Freudian slip. But, again, it is also good as an issue for Nigerians to understand the society in which they have found themselves. Now, see what Amaechi has made from politics: money, fame, power, and associated stuffs. Which means: his friends and classmates who did not join politics were foolish after all!

As 2023 nears us by the eyelid, Olanipekun’s intervention is a wakeup call for Nigeria to develop. For this to happen, Nigerians must have, and imbibe a separate, indigenous, and totally Nigerian culture of socio-political development. Quite frankly, a system that carelessly empowers wrong hands and cronies who end up as political liabilities and traitors is not only politically counterproductive, it also engenders backward atavism.