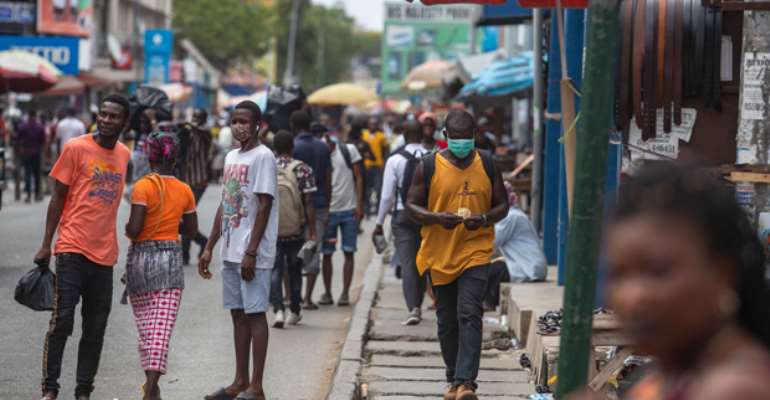 For want of a better expression we shall settle on 'irresponsible conduct' to describe the unyielding response to the many calls on Ghanaians to use face masks and generally adhere to the various WHO/government endorsed protocols.

A walk through Accra Central shows a cursory estimate of some 30% or so persons using the face masks and of this number, some have the protection covering their chins rather than their noses and mouths. Such persons have the masks on just because they want to avoid police attention and not the dreaded disease.

The picture of irresponsibility presented by the unyielding response to the calls to the many residents of Accra could be the reason behind the nation's capital topping the list of locations with the highest numbers of infected persons.

In a garrulous society where radio stations, some of them enjoying the fallouts emanating from the non application of the hygiene protocols when they announce the new figures, the reasons behind the trend is largely avoided, hardly discussed. After all, the objective is to make those responsible for managing the pandemic look bad. Unfortunately, managing such a health emergency being a shared responsibility, it requires both government and the public to play their roles responsibly. While the former has played its cards well, the latter is found wanting as it behaves dangerously.

Most people are not caring about the dangers posed by the many people who do not use face masks and walking around as though nothing is amiss in the world.

Even the existing laws are too challenging to be enforced, let alone one which is as novel as the coronavirus.

A few weeks after making the use of the face mask mandatory, the picture of Accra remains the same. Irresponsible public conduct in the face of a pandemic for which various protocols have been prescribed is the feature of Accra, and we regret to state.

Although the law enforcement agents, as we have observed, will hardly enforce the directives, they remain the most organized state agency which can do this.

We are dealing with a health emergency the solution for which remains responsible hygiene conduct even in the face of obstinacy on the part of the people.

Getting the clergy of all faiths, opinion leaders and traditional rulers will help. The assemblies too can play a vital role in this direction. They have already been charged to deal with the subject. We are yet to see them in action.

Those who talk about the rising numbers should consider the irresponsible conduct of Ghanaians as they walk about without face masks.

‘Sputnik-V procurement contract must be re-examined’ – Kwaku...
36 minutes ago

Getting Sputnik-V vaccines from black market using middlemen...
36 minutes ago