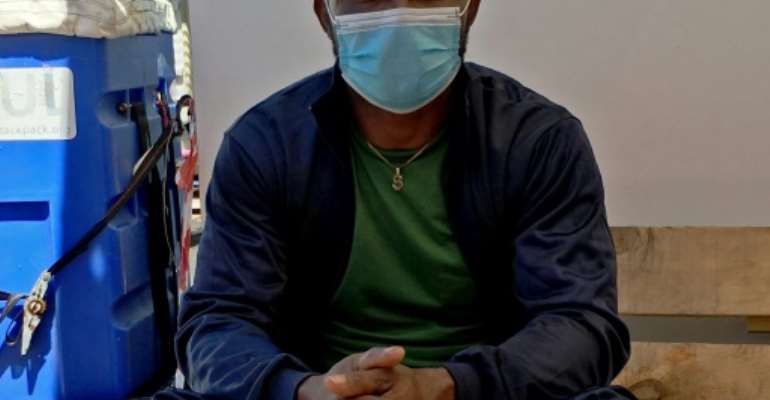 Peter Enyinnaya says he fell into a 'trap' when he was on his way to work in Libya. By Shahzad ABDUL (AFP)

His wife was three months pregnant when Peter Enyinnaya was ambushed in Libya.

When he eventually returned from captivity, she had disappeared, likely believing him to be dead. Today, at the gates of Europe, the 38-year-old Nigerian is nearing his goal: to find his family.

As he sits on an upturned crate on board the Ocean Viking rescue ship, which pulled him and 46 other migrants to safety from their dinghy on Tuesday, Enyinnaya said he hopes beyond hope that Italy will provide a port of safety.

He says he knows his family is there. He had written the address down on his mobile phone, but the people smuggler who packed him onto the small blue dinghy in Libya stole it.

The mechanic, who wears a gold chain and a green T-shirt distributed by SOS Mediterranee, the charity which runs the Ocean Viking, says that won't stop him.

Disaster struck in 2017 when Enyinnaya, who had left home to try his luck in Libya, was on his way by taxi to work in Sabha, over 600 kilometres (370 miles) south of Tripoli.

"I fell into a trap," he told an AFP journalist on board the Ocean Viking.

Men "dressed like the military, but they were not the army, stopped my taxi, put me in their trunk, and brought me in a building, I don't know where, where they locked me up with four other black Africans," he said.

There, he says with his head bowed, he was "tortured for months... they beat me, beat me with an iron bar, electric shocks too".

The ordeal, he said, lasted nine months, during which two of his fellow prisoners died.

AFP was not able to indepedently verify Enyinnaya's story, but human rights groups have long spoken about rampant abuse of migrants in Libya.

And since he could only give them 5,000 dinars, he had to work for free as their mechanic until one day he was thrown "on the side of a road, half dead".

After a stay in hospital, he realised that his wife had gone, leaving no trace behind.

Finding her and finally meeting their child has been his obsession ever since, Enyinnaya said, opening his wallet and pulling out a photograph of his wife, "the love of my life".

'End of the journey'

He managed to track her down via Facebook: she was in Italy, along with their two-year-old daughter.

But the Mediterranean sea still separated them. So Enyinnaya went back to work and made enough money to buy himself a seat on a dinghy, hoping to reach Italy.

When he saw the Ocean Viking rescuers after three days and nights at sea, he thought it was "a miracle".

On Friday the ship was seeking a port of safety to disembark the 180 people it has pulled to safety over the last week.

"Find them (his wife and daughter) would be my greatest desire. I could have died for that. My journey will only end when I will hold my daughter" Enyinnaya said.

He was not around to name her when she was born, but admits his wife could not have chosen better, for she is called Miracle.