Is Ghana Covering Up for the Nigerians? 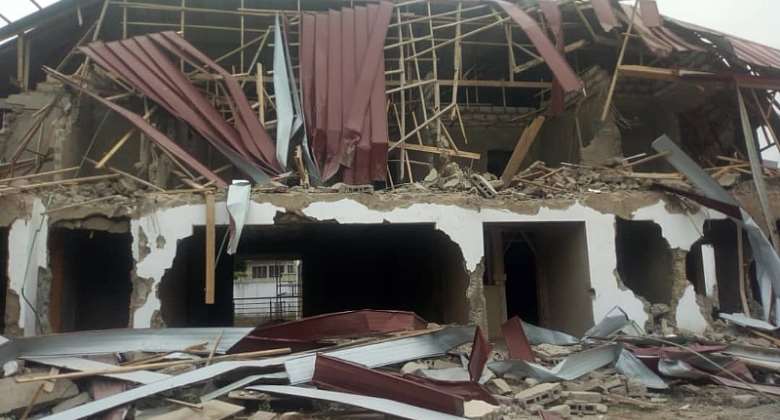 It was clear to me from the get-go that the truth about the massive wrecking of the building alleged to have been the private property of the Nigerian High Commission to Ghana lay somewhere in-between the two competing narratives that we were earlier on presented with, namely, the narrative by the Paramount Chief of the Osu-Accra Traditional Area, to wit, Nii Okwei Kinka Dowuona, VI, on the one hand, and the official operatives of the Nigerian High Commission or Embassy, in non-Commonwealth parlance (See “Ghana to Rebuild Demolished Nigerian High Commission Complex – Ayorkor Botchwey” Pulse.com.gh 6/25/20). And now, of course, there appears to be a third narrative, that of Ghana’s Minister for Foreign Affairs, Ms. Shirley Ayorkor Botchwey. I have read at least two, possibly three, news reports on this same subject, the second of which is captioned “Gov’t Identifies Suspects of Nigerian Building Demolition” DailyGuideNetWork.com / Ghanaweb.com 6/26/20). The latter news report appears to be the more detailed.

On the whole, on the face of things, that is, it well appears that Nii Dowuona was perfectly accurate in his contention that the Nigerian High Commission did not possess any documents indicating legitimate ownership of the land in dispute, because readers are informed that the Ministry of Foreign Affairs intends to get the Lands Commission to issue a Land Title Certificate to the Nigerian High Commission as a means of “regularizing” its title of ownership of the landed property in dispute. Now, the critical question becomes, “Why is the Nigerian High Commission only now being issued a Land Title Certificate for a purchase that the latter was supposed to have made as far back as 20 years ago, in August 2000? This, obviously, is one of the legions of messes created by the Jerry John Rawlings led regime of the National Democratic Congress. In the year 2000, of course, it was the Rawlings-founded and led National Democratic Congress that held the reins of governance. The soon-to-be President John Agyekum-Kufuor did not arrive at the erstwhile Flagstaff House, or even the old Osu Slave Fort until January 7, 2001.

We also know that three years before, in 1998, the then-President Jerry John Rawlings had extorted his infamous $ 5 Million (USD) from Gen. Sani Abacha, soon to be deceased. We would leave the details of this characteristically NDC extortion racket out of the present column, as it does not appear to be relevant to the subject of the present discussion. Foreign Minister Botchwey has also been quoted by the media to be claiming that the disputed landed property was offered to the Nigerians as far back as August 2000, but she does not tell us the fact of whether the Nigerians promptly took up the offer or not at the time. And if they did, why were they not issued a Land Title Certificate, since we also learn in another version of the same story that the Nigerians have presented some receipts duly authenticating their ownership of the land in dispute? Something is clearly not adding up here, as New Yorkers are wont to say. Which means that Nii Dowuona’s version of the story may very well be the real or true story.

The preceding notwithstanding, even as I have noted in a previously published column, the advisable or savvy thing to do, ought to have been for the Paramount Chief of Osu and the Osu Traditional Council to have consulted with the Ministry of Foreign Affairs before taking the unnecessarily costly course of action that resulted in the wrecking of the building in question. In the recent past, we were informed by the media that the Nigerians had not creditably acquitted themselves as tenants of a real-estate property belonging to the Government of Ghana. The legend goes that for 5 years, staff of the Nigerian High Commission occupied a state-owned building for which use they had defaulted on rental payments for just as long. All this, of course, boils down to a bad behavioral pattern and the critical question of credibility.

You see, the decision to have the demolished building restored to its stage of construction prior to its demolition ought not to be made to unfairly fall squarely on the purse or wallet of the Ghanaian taxpayer. Rather, it ought to be split three ways among all the apparently negligent parties involved, namely, the Nigerian High Commission itself whose transactional negligence precipitated the unfortunate demolition incident; the Osu Traditional Council, whose members bizarrely waited until the building’s structure had been lifted to near completion before rushing to take what they perceived to be the necessary action to stop the encroachment on their royal stool land; and the Government of Ghana, whose apparent administrative laxity and failure to communicate the sale of the land in question to the Nigerian High Commission to the Osu Traditional Council, via the Lands Commission resulted in this unnecessary stress and wanton destruction of the real-estate property in question. As it presently stands, it well appears that there is more than enough blame to go around, as Americans are wont to say.