By Armel Baily with Patrick Fort in Abidjan
Burkina Faso 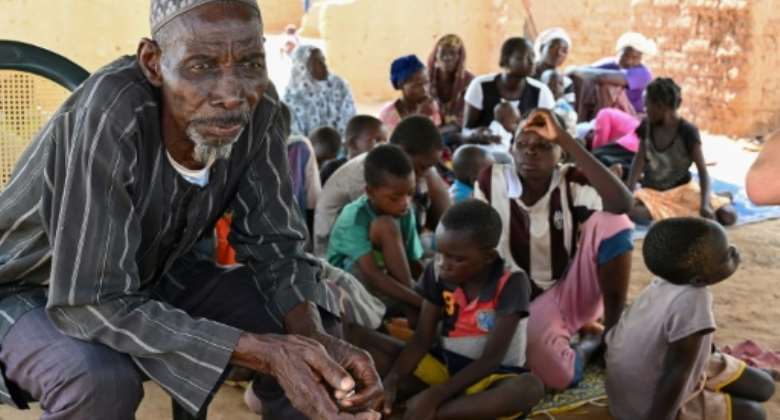 Belem Boureima, a 74-year-old farmer, and his family. They are among the hundreds of thousands of people in Burkina Faso who have fled their homes because jihadist attacks. By ISSOUF SANOGO (AFP)

Little more than five years ago, Burkina Faso was on the up, priding itself as a favoured tourist destination for well-heeled Europeans.

Today, the country seems to be visibly sinking, battered by a jihadist revolt that has swept in from neighbouring Mali, rolled into Niger and cast a shadow on the countries to the south.

More than 1,650 civilians and soldiers have died since 2015, according to a local monitoring group, the Observatory for Democracy and Human Rights (ODDH) -- a figure that some say is probably just a fraction of the real tally.

Nearly a million people have fled their homes and nowhere in the country rates as safe, under travel recommendations issued by Western governments.

The country, one of the poorest in the world, is scarred by stories of tragedy.

"My wife was killed in an attack in Arbinda in December, leaving a two-year-old baby," said Aly Sidibe, a 42-year-old former herder displaced in the northern city of Kaya.

"The child is in Ouagadougou. He is being taken care of by social services."

Sidibe said he had lost his entire herd.

Burkina Faso lies in the heart of the Sahel, whose leaders have joined a French-backed effort to roll back jihadism in the vast semi-desert region.

President Emmanuel Macron will join his five allies in the Mauritanian capital of Nouakchott on Tuesday to debate the state of the campaign.

Burkinabe General Moise Miningou, speaking to AFP, hit out at perceptions that the armed forces were failing.

French troops in Burkina Faso last year. France has deployed 5,100 troops in the Sahel in its Barkhane anti-jihadist mission.. By MICHELE CATTANI (AFP/File)

"People who talk like that do not know the real situation," he said, pointing to a strategy of "liberating axes (and) securing populations."

"(...) The battle is hard but we will shortly get results," he said, noting that the country would have five operational combat helicopters by the end of the year.

Security sources say the armed forces have been a casualty of Burkina's political turmoil.

For several years, Burkina Faso seemed immune to jihadist attacks -- the result, according to some analysts, of a secret deal between the then president, Blaise Compaore, and militant groups.

After Compaore was ousted in 2014, the armed forces were essentially muzzled, deprived of funding, equipment and training, according to the sources.

The transitional government that took over and the government of President Roch Marc Christian Kabore, who took power in 2015, were afraid of coups.

"The army was never equipped, and there was never an appropriate strategy," Savadogo said.

As a result the armed forces went from defeat to defeat, sometimes masking shortcomings with announcements of spectacular victories.

In the long term, the territory over which the state exercises its authority is shrinking and the army, police, teachers and administration are absent from whole swathes of the country.

Some say Kabore has done little to quell the relentless jihadist attacks.

"He's a kind of lazy king who holds more and more audiences and listens in his chair without making any decisions," a diplomatic source in Abidjan said.

Savadogo said the void left by the state has been filled by inter-communal violence.

He pointed to the clashes between the Mossi and Fulani -- an ethnic herder group, also called Peuls, who are accused by other communities of complicity with the jihadists -- as the example of a vicious circle.

People flee with their belongings after a jihadist attack in rural northern Burkina Faso in April. Nearly a million people have been displaced. By OLYMPIA DE MAISMONT (AFP)

"The Mossi abuses in retaliation for the actions of armed terrorist groups have practically pushed young Fulani to join jihadism. They really have no other choice if they want to survive, but also to take revenge," he said.

Exacerbating inter-communal tensions is a recurrent strategy of jihadist groups throughout the Sahel, according to a French security source.

These groups also seek to appeal to the aspirations of populations abandoned by the state. They have threatened holders of hunting concessions and mining sites, often granted by corrupt state officials, and then offer the hunting and gold-panning areas to locals in the north and east.

Drissa Traore, a teacher and political analyst, said Kabore's lavish promises on security are unlikely to impress the public, many of whom are likely to see it as a campaign pitch ahead of presidential elections due in November.

"Their worries are elsewhere. Water, gas, food, everything is lacking... Even when these products are available, the prices are tripled or quadrupled," Traore added.

The security crisis may deprive entire areas of the country from taking part in the vote, which could lead to a skewed or disputed result.

"Despite a disastrous record, the ruling party will win, because the opposition has no leader. We run the risk of even more tension," predicted Savadogo. "We're going to sink even further.'