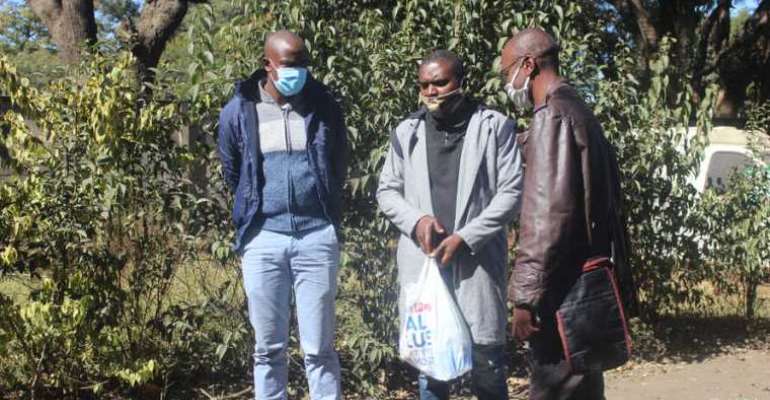 Journalists Samuel Takawira and Frank Chikowore, and an unidentified policeman (left to right) arrive at the Mbare Magistrate's Court in Harare for their first appearance on charges of contravening Zimbabwe's lockdown regulations. (263Chat/Manashe Chokoza)

Zimbabwean prosecutors should drop the charges filed against two journalists for violating the country’s COVID-19 lockdown regulations and ensure that they can report freely about alleged abuses by security forces, the Committee to Protect Journalists said today.

Frank Chikowore, a freelance journalist, and Samuel Takawira, a reporter for the independent news outlet 263ChatExternal link , were arrested on May 22 at the Parktown Hospital in the Waterfalls suburb of the capital, Harare, according to localExternal link newsExternal link reportsExternal link and the journalists, who spoke to CPJ via phone and messaging app. They were charged with failing to comply with Zimbabwe’s COVID-19 lockdown order, their lawyer, Paidamoyo Saurombe, told CPJ.

The journalists had wanted to interview three hospitalized opposition activists who said they had been abducted, beaten, sexually assaulted, and abused after the activists were arrested at a protest at a roadblock on May 13, according to the journalists and Saurombe. The three activists had been protesting the state’s alleged failure to provide for the poor under the COVID-19 lockdown, according to The GuardianExternal link .

Journalists, under the categorization of communications workers, were designated an essential service for the COVID-19 lockdown period that began on March 30 according to Statutory InstrumentExternal link 2020-083 Public Health (COVID-19 Prevention, Containment and Treatment) (National Lockdown) Order, 2020. However, in the first few days of the lockdown several journalists and media workers were arrested by police, according to a statementExternal link by the Zimbabwean chapter of the regional press freedom group, the Media Institute of Southern Africa. On April 19, the essential worker designation was expanded to include all media workers, including newspaper vendors. The next day, April 20, a Zimbabwean high court ruled that the arrests of journalists should stop, following a petition to the court by MISA Zimbabwe and a local journalist, according to mediaExternal link reportsExternal link .

“It is clear that the police are using COVID-19 lockdown regulations as a pretext to censor Samuel Takawira and Frank Chikowore, whose only ‘crime’ was to do their jobs and report on alleged abuses by Zimbabwe’s security forces,” said Angela Quintal, CPJ’s Africa program coordinator. “Prosecutors should not be party to a further injustice and should rather uphold the rule of law by dropping the charges immediately.”

Chikowore and Takawira were detained at the Parktown police station for most of the day on May 22 and transported to Harare’s central police station later that evening, where they were formally charged with failing to comply with a lockdown order in contravention of clause 11(b) of Statutory InstrumentExternal link 83 of 2020 of the Public Health (COVID-19 Prevention, Containment and Treatment) (National Lockdown) Order, 2020, Saurombe told CPJ via messaging app. If found guilty they will be liable for a fine of up to Z$36,000 (US$112), or one year in jail, or both, according to Statutory InstrumentExternal link 2020-057 Criminal Law Codification and Reform (Standard Scale of Fines) Notice.

The pair appeared in court the day after their arrest, but were remanded in custody over a holiday long weekend until May 26 for a decision on their bail application, Saurombe said. The magistrate granted them bail of Z$500 (US$1.55) each and they were warned not to interfere with witnesses, Chikowore told CPJ. They appeared briefly in court on June 15, Saurombe told CPJ. A trial date is expected to be given at their next court appearance on June 25, he said.

Zimbabwe’s permanent secretary for information Nick Mangwana and the area public prosecutor in Mutare, Tafara Chimbara, did not reply to requests for comment sent via messaging app on June 22 and 23.