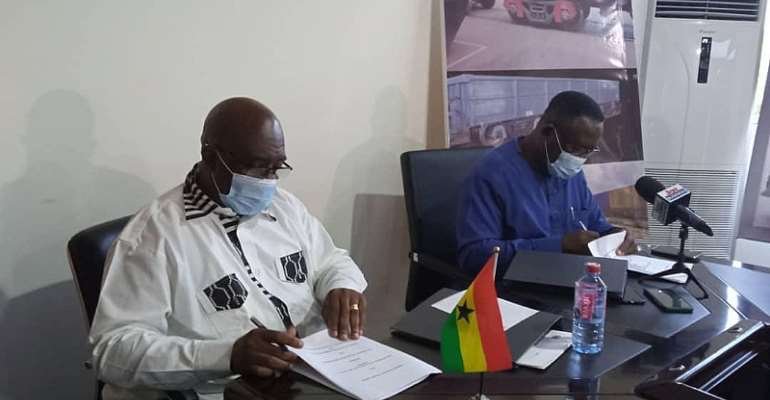 A memorandum of understanding (MoU) has been signed between the Government of Ghana and the Global Railways Engineering Limited of South Africa for the establishment of a railways assembly plant in the country.

The MoU is towards the conduct of a four-month feasibility study for the formation of the plant.

Speaking ahead of the signing ceremony on Monday, June 15, 2020, Minister of Railways Development, Joe Ghartey, says when established, the plant will first begin with assembling wagons and later move to assembling locomotives.

It will pave for technology transfer where young Ghanaian engineers and technicians would be offered the opportunity to learn from the South Africans.

He expressed the belief that the agreement was in the right direction.

He revealed that Global Railways Engineering Limited has expertise in assembling.

The MoU gives them a period of four months to do their feasibility studies, he noted.

Government under the MoU, has the right to give them facilities to establish their plant, the Minister revealed, adding that Tema and Takoradi are being considered.

After the four months period, they can move a step further depending on their findings, according to him.

The Minister revealed that total investments in the Railways sector so far exceed $1 billion.

Director of Global Engineering Ghana Limited, Dr. Jimmy B. Heymann, was optimistic that the cooperation will lead to technology transfer where young Ghanaian engineers will have the opportunity to learn from South Africa experts.

The cooperation will be beneficial to both Ghana and South Africa and improves intra-Africa trade – deputy High Commissioner of South Africa to Ghana, Thapelo Madumane.

Witnessing the signing ceremony were the Deputy High Commissioner of South Africa to Ghana and Chief Director of the Ministry of Foreign Affairs and Regional Integration.

Akufo-Addo to lead Ghana's delegation to COP26
47 minutes ago