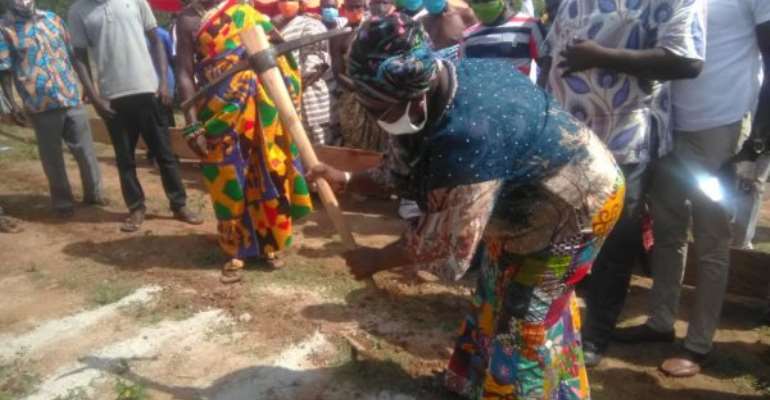 The hospital project, expected to be completed within nine months is being financed from the One Million Dollar per Constituency package outlined by the government to help develop every constituency.

The Health facility if completed would serve over 300,000 People in the Gomoa Central District and save them from traveling to Winneba, Kasoa and Agona Swedru to seek medical treatment.

The Deputy Minister said the creation of One million Dollars per constituency in all the 275 was to ensure that every constituency got its fair share of the national cake in order to receive the needed facelift.

She said other components of the project would include; construction of doctor's bungalows and nurses quarters to enable Ghana Health Service to post qualified medical doctors to manage the facility.

The Deputy Minister said apart from the Polyclinic, the constituency would enjoy more than four different projects under the fund and appealed to the chiefs and people of Gomoa Abonyi to vote for President Akufo-Addo and herself to win in the December 7polls to enable them continue infrastructural development.

The Deputy Minister also presented a brand new canoe to vegetable growers at Gomoa Ayenusadze for the crossing of the River Ayensu when it overflows its banks.

The donation was in response to complaints by farmers that it became extremely difficult for them to cross the river to the other side during raining season, hence the support to facilitate their farming activities.

Mr Benjamin Kojo Otoo, District Chief Executive(DCE) for Gomoa Central said the MP has directed the Contractor to recruit artisans from Gomoa Abonyi to generate employment for the people.

The DCE cautioned the artisans and other laborers who would be engaged by the contractor to desist from diverting building materials.

Mr Otoo also appealed to the chiefs, Assembly members, Unit Committees, opinion leaders and other stakeholders to intensify education on Health protocols to stop the spread of the COVID-19 Pandemic.

Nana Osuan Asare VI, Gyantuahene of Gomoa Akyempim Traditional Area and Chief of GomoaAbonyi thanked government for the the Polyclinic in the town giving their assurance to support government to succeed.

Nana Osuan Asare assured the MP and DCE that the chiefs and elders would make sure that artisans who would be recruited for the project worked satisfactorily.