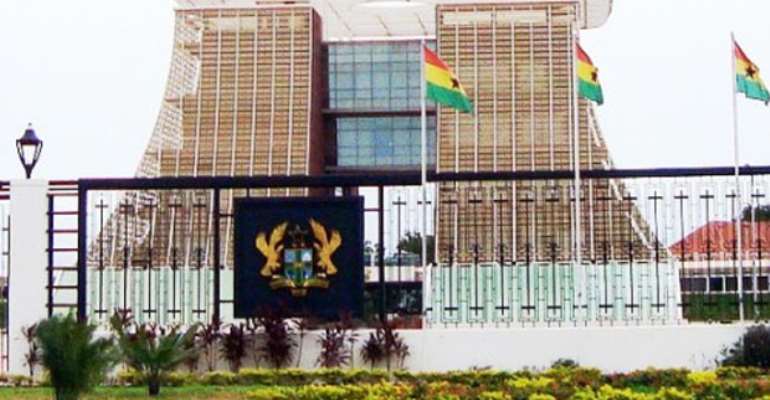 On Friday, May 1, 2020, a young man from my constituency called me that he and seven others all from my constituency have been arrested at New Akrade for carrying timber that was auctioned to them and paid for in Ho with receipts. This means that the eight young men were not carrying illegal timber. The technical officer at New Akrade had already extorted money from these young men for an unknown reason since they were not carrying illegal timber. Then, the coordinator of the Forestry Commission at the Achimota Forest ordered the arrest of the young men and their trucks were matched to the yard of Achimota Forest under the command of one George Osei who is the coordinator of the Achimota Forest Commission. The boys and their trucks arrived in the yard of Achimota Forest on Friday, July1, which was a public holiday.

Fortunately, the coordinator in the person of George Osei is known to me and I have his mobile phone number. I, therefore, decided to call George Osei for clarification on Saturday, May 2, 2020. I did call him (George Osei) on Saturday and had a talk with him. As soon as I dropped the line with him, I received yet another call from the boys that George Osei has ordered his men to offload the timber into a waiting car to be carried outside the Achimota yard to elsewhere, of which the boys said is a timber market belonging to George Osei. I immediately got back to George Osei on the phone to ascertain the veracity of what the boys had told me but to no avail. My several calls went through to Osei but the failed to pick up my calls. Just there and then, the MCE of Hohoe Municipal in the person of Hon. Teddy Ofori also got the Achimota Forest in defence of the boys and all attempts to get to Osei for clarification proved futile. However, Hon. Teddy Ofori managed to stop the dislodging of timber from the trucks into the waiting KIA truck that Osei had brought.

On Monday, May 4, I decided to call George Osei in the morning around 7:45 of which he responded with unbridled mirth, and both of us agreed to meet in this office between 9:00am and 10: 00am. Indeed by 9:30am, I was in his office and he arrived exactly at 10:19am. As soon as Osei got himself prepared at about 10:45am for our discussion, a certain deputy minister also walked into Osei' s office and as fate will have it she (the deputy minister) is higher up the 'electrohuman' series because of her public position as the deputy minister of state. Consequently, Osei had to attend to her for about one hour or so and returned to me almost 12 noon. We continued our discussion on the issue and I suggested to Osei to invite the Volta Regional Forestry Officer in the person of Michael Paintsil who issued the receipts to the auction timber the boys purchased. He (Osei) agreed with me and told me that the said officer of the Forestry Commission in the Volta Region has already been invited. I contacted the Forestry Commission officer in the Volta Region on his cell phone and he emphatically told me that nobody has invited him to Accra and the officer repeatedly maintained that nobody had invited him even when I went to the Minister of Lands & Natural Resources and was prepared to talk the minister but for the fact that the minister was already on his feet heading towards a meeting and could not have had enough time for our discussion on this issue.

The evangelical zeal against the releasing of timber to the boys who have genuinely purchased the auction timber is amazing. George Osei kept drifting the argument on as to why they timber was seized from the boys and why they should ultimately pay a bogus penalty and removing a chunk of timber from each truck before releasing the timber to them.

It is unimaginable that George Osei could bring a young man whose name is only given as Frank to initiate the swearing of an affidavit for the young men at the cost of GH¢80 and Frank claimed that he worked out Osei to release truckloads of timber having slapped a penalty of GH¢1,000 on each of them and Frank is also demanding GH¢500 from each of the young men. How much money are they making to go through this ordeal? So, from Monday morning as I have stated earlier that I saw Osei and had discussed with him to invite his superior officer from the Volta Region to ascertain the validity of the receipts and there is anything untoward, then they made the young men pay a penalty and allow them to take their timber away.

Some of the cabal behind Osei ‒ pride, yes, vain pride with its associated vices of arrogance and pomposity ‒ are already lacing their boots to stand for various executive positions come the election time and are expecting to win the top most position in the national executive of our great NPP. Osei and his cabal who are to serve the public feel that they must be worshipped and adored by all whom they encounter. After all, if they do not lead the way, one may not achieve what he or she wants.

While they allow some officials who are higher up in the 'electrohuman' series because of their positions like the minister, MP, CEO or registrar of some government agencies to just walk into their offices ignoring those who are already in a queue for long hours to see some of these semi-gods officers passed through their backdoor offices and leave these members of the public waiting without even able to see them and would have to return the following day with the same routine over time and sometimes some people give up even though they are in dire need to see some of these government executives for very good reasons.

There are many cases where these chief executives could walk away and sometimes talk anyhow to people waiting to see them, not at all been mindful of the fact that the positions they occupy is just an opportunity and or that they could even lose these positions before or at the end of the political cycle. Indeed, some of them have just been brought from obscure corners into the limelight of those positions because of political dispensation.

Some of these arrogant people appointed as what-nots of these government agencies believe that the powers in his/her hands are therefore over and that after God Almighty they are next to judge the living. They never learn and are excessively arrogant like George Osei and his cabal who will only learn a little sense when they are no more in these positions. These arrogant and pompous people should look around them; people who once wielded absolute political power had fizzled out. There are very many examples around us. I met a former first lady who once upon a time was very powerful person in Ghana at the GCB Bank opposite the Vodafone office at the Kwame Nkrumah Circle a couple of weeks ago walking with only one person into the banking hall; yesteryears, that was not the case.

Finally, I would like the powers that be to find out where George Osei has been keeping the timber that he takes from the trucks he arrests over the years and also how he assesses the penalty that those who were arrested pay. Again, is it not time to re-assign people, for instance, secretaries, coordinators, registrars, administrators, etc. who have spent more than four years in their particular designations? When such people are kept in offices for too long it breeds corruption and arrogance. There are too many of them in the ministries, department and agencies. Look out for them and re-assign them to bring sanity and sobriety at various work places.