Piped noise, robots and sex dolls: what happens in stadiums without fans

Livening up sport without fans is a challenge for competitions returning after the coronavirus, and organisers have tried several ways to make empty stadiums more appealing.

After South Korean football club FC Seoul received a record fine for using sex dolls to fill seats, AFP Sport looks at some of the innovations:

Sport took a surreal twist when Taiwan's baseball league started last month, with robots providing live music as they drummed in the stands.

In what could have been a scene from Star Wars, a group of robots -- some wearing wigs -- banged drums for Rakuten Monkeys' opening game.

Mannequins wearing team colours were placed around the stadium, along with cardboard cut-outs of fans, media and players' family members.

Cardboard cut-outs have been a popular way to fill seats, but German football club Borussia Moenchengladbach took the idea a step further when it gave fans the chance to have life-sized images of themselves in the stands. 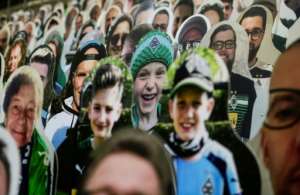 Life-sized images of fans have been placed at Borussia Moenchegladbach's stadium. By Ina FASSBENDER (AFP)

Thousands of people have taken up the offer, where they pay 19 euros to have their image placed in the Borussia-Park stadium.

"The campaign organisers are regularly overrun with orders -- we can hardly keep up trying to install them all," fan representative Thomas Weinmann told the Bundesliga website.

The sound of tinny, recorded cheering has replaced the roar of the crowd in some stadiums. In South Korea's K-League, recordings of popular chants have echoed around the country's empty football venues, some of which hosted games at the 2002 World Cup. 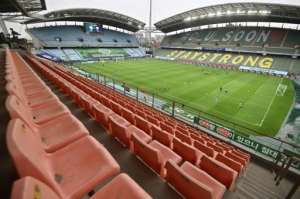 Empty stands are an unwelcome sight for fans and players. By Jung Yeon-je (AFP)

"We've had a number of different trials and consulted a number of people, including from the movie business, just to get it right," Lewis Martin, managing director of broadcaster Channel Seven, told AFL.com.au.

Software developers have launched an app, MyApplause, which allows fans to combine to create crowd noise from their homes. 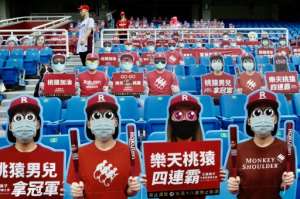 Users can choose from cheering, clapping, chanting and whistling, and the resulting noise is played over the stadium loudspeakers and the spectators' home sound systems. Team-specific logos and chants are available.

South Korean baseball has also taken a high-tech approach with fans beamed onto a stadium big screen as they watch the game online. 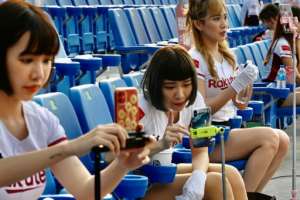 Baseball cheerleaders in Taiwan have been carrying out live interactions with fans from the stadiums, chatting and broadcasting dance routines over their mobile phones. One cheerleader even cooked and ate a barbecue while sitting in the stands, while streaming herself on the internet.

Taiwan's baseball league has enjoyed unaccustomed popularity during the coronavirus, with millions of sport-deprived fans watching English-language commentaries from overseas.

Much controversy has been generated by South Korea's FC Seoul, who received a 100 million won ($81,000) fine -- the biggest in K-League history -- for placing sex dolls in their stadium.

After reviewing the case, the K-League accepted FC Seoul's claim that it did not know the mannequins were sex toys, but said it "could have easily recognised their use using common sense and experience".

"The controversy over this 'real doll' incident has deeply humiliated and hurt women fans (and) damaged the integrity of the league," it said.

FC Seoul accepted the decision, apologised and promised to prevent a repeat.