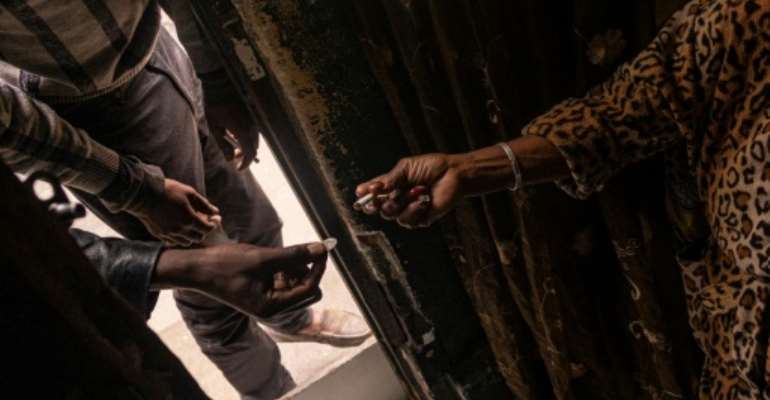 The moratorium on cigarette sales has driven the market underground. By Emmanuel Croset (AFP/File)

But less than a week later, one of his cabinet ministers reversed the decision for "health-related" reasons -- specifically, that many smokers roll their cigarettes, then share them.

"When people zol, they put saliva on the paper, and then they share that zol," said cabinet minister Nkosazana Dlamini-Zuma, referring to a South African word for hand-rolled cigarettes.

Dlamini-Zuma, a medical doctor, is a key member of a special cabinet task force handling the health crisis, which has seen South Africans go under one of the world's most stringent lockdowns.

"The way tobacco is shared does not allow for social distancing," said Dlamini-Zuma, adding it "actually encourages the spread of the virus."

The U-turn prompted some half a million people to sign a petition demanding the resumption of cigarette sales.

The tobacco industry is also livid.

The Fair-trade Independent Tobacco Association (FITA), which represents some cigarette makers, said it was baffled by government's about-face and is taking legal action.

"Public comments have been limited to the ills of smoking (but) have not been adequately linked to the fight against COVID-19," FITA president Sinenhlanhla Mnguni said in court papers.

The ban "is causing unnecessary increased stress" for smokers under the lockdown, he argued.

The moratorium on cigarette sales has driven the market underground.

According to a government-commissioned study by the Human Sciences Research Council, nearly a quarter of smokers in informal settlements and 16 percent of township residents are now able to buy cigarettes during the lockdown.

Salim Abdool Karim, a leading epidemiologist and the government's chief technical advisor on the COVID-19 pandemic, says the impact of tobacco on the crisis is outside his remit.

But for Mosa Moshabela, dean of the University of KwaZulu-Natal's public health faculty, the government's decision is perfectly justified.

South Africa's 11 million smokers "are among the high-risk groups," especially older patients and those with chronic diseases, Moshabela told AFP.

But he criticised the government for its lack of communication on the issue.

On the political front, the smoking ban has fuelled speculation about recurrent infighting within the ruling African National Congress (ANC).

Finance Minister Tito Mboweni has told lawmakers he "didn't like the continuous ban on the sale of alcohol and tobacco, but I lost the debate and therefore I have to toe the line."

The ban has cost the treasury 300 million rand (US$16 million) in lost taxes, according to Edward Kieswetter, the head of the revenue collection agency.

Analysts suggest the government flip-flops point to lingering divisions from the last ANC conference which elected Ramaphosa in 2017.

"The finance minister is giving the picture that there is still that machination... and is almost giving us the impression that being in this cabinet is horrible, like drinking Dettol (disinfectant) every morning," commented political analyst Ralph Mathekga.

It took Ramaphosa five days to publicly clear up the confusion created over the off-again, on-again tobacco ban.

"This was a collective decision and the public statements by both myself and the minister were done on behalf of, and mandated by, the collective I lead," Ramaphosa said.

"It is wrong to suggest that there are ministers or a president doing and saying whatever they want on this matter," he said.

But according to Mathekga, the president's long silence showed "that the political differences that have existed within the ANC before corona(virus) did not take too much time to... resurface."

The ANC has been divided for several years between supporters and opponents of Jacob Zuma, Ramaphosa's predecessor.

Zuma was forced to resign in 2018 over corruption scandals.

At the end of 2017, the two camps were locked in a bitter struggle for the control of the party, with Ramaphosa narrowly defeating Dlamini-Zuma.

The tobacco ban rancour has reopened those political fault lines.

"The Zuma faction has more reasons now to say that they still exist," Mathekga said.