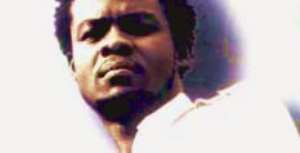 More and more new faces are showing up on Ghana's music scene this year, with hopes of enlivening the standards in the industry and moving to the international scene to grab laurels.

Blaqsam, known in private life as Alfred Sam, is yet another upcoming artiste who managed to sail through this year with a ten-track album titled “Me, Myself and I.”

Most of the songs were written by Blaqsam with the support of Praye Honeho and produced by Kawa and Jay Q of the Groove Zone and Hush Hush Studios respectively.

Currently, the lead track, 'Esi Vera' is getting a lot of review and airplay on both radio and TV, due to its raving nature. 'Suzzy' is also interesting as it evokes a lot of emotions. In this song, Blaqsam discloses his love affair with his love, Suzzy, saying that no one can touch his Suzzy.

The rest of the tracks are also appealing to the ear, with 'Peneso' unleashing some trendy raps and rimes.

Blaqsam, a former student of St. Augustine's Senior High School who is from the Ashanti Region of Ghana, says music is a dream come true.