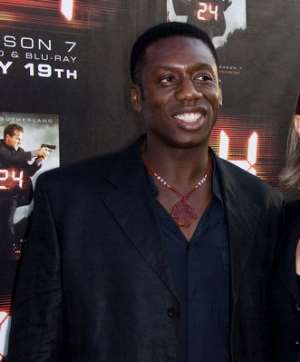 Many people would remember Hakeem Kae-Kazim for his role as Georges Rutaganda in Hotel Rwanda in 2004. But the Nigerian-born, English-raised South African actor/producer has been around, paid his dues and continues to be on the rise. He recently starred in Xmen Evolutions: Wolverine and also appears as Colonel Ike Dubaku the leader of a coup in the fictitious African country of Sangala in the upcoming season of US hit action drama series, '24'. He has a film coming out called 'The 4th Kind' and another called 'Darfur' with Billy Zane.

Ghanaian international entertainment reporter/ publicist, Ameyaw Debrah recently interviewed Hakeem about his role in 24; his views on Nollywood and African films among other issues. Asked why Hollywood often does films about African figures, without using African actors in the lead, Hakeem answered: “Hollywood is using more African actors now than it has done, but a lot of the time when it wants to cast lead African roles it doesn't, mainly because they are only interested in having a name because that means box office and unfortunately there aren't that many African box office names out there yet, but we are coming!”

He went on to add that there are so many iconic figures from the African continent that he would want to portray on film! However he said he would love to portray Kwame Nkrumah the most. “My first would be Dr. Kwame Nkrumah, the father of pan-Africanism. His voice /story would be a telling reminder to how we have found ourselves on this continent since the end of colonialism”.

Jamati: What role do you play in 24?
I play the role of Colonel Ike Dubaku the leader of a coup in the fictitious African country of Sangala.

Jamati: How did you get that role?
The role was actually offered to me, but only after having been seen by them over a year for five other roles; none of which I got.

Jamati: Why the shooting in SA?
The reason for the prequel being shot in South Africa was because the story line is an African one and they used South Africa and, in particular Cape Town to double as Sangala

Jamati: What is your opinion on African films?
It depends on your definition! But my view is that, we still have to make them on an international level, or let me put it another way, with international production values - the English speaking nations anyhow - the francophone nations do very well in this regard. Nigerians make African movies from a totally African perspective but without the international production value that is needed. South Africa has begun making some fantastic African movies but they are few and far between, although I know this is changing.

Jamati: What's your opinion on Nollywood?
Nollywood has great potential; they tell original African stories from an African perspective with an African voice. That is why they have had such a reach around the continent and throughout the Diaspora. I believe in a few years we will see some truly great African cinema, with international production values, come out of the Nollywood machine.

Jamati: What could be done to improve Nollywood?
More money going into the making of Nollywood films. This means cutting down on piracy so the film makers can get a proper return on their investment and thereby increase production values throughout. The audience is out there, and hungry for African stories and heroes to be portrayed

Jamati: You produced a Nollywood-styled movie. Why? What was it about?

I produced a Nollywood movie in the Nollywood style while in South Africa to see what it was like working in that way and also to see whether it was a way of giving a voice to local film makers who had stories to tell but without the access to the local film making machine - which I felt was more interested in making Eurocentric type of films or films in a more western type of way negating the African voice even when they had an African theme. The film was called “Coming to South Africa” and it was about two Nigerians who leave home and head south to make a better life for themselves. They both find it difficult and one decides to make his way selling drugs while the other decides to go and work his way up, starting off as a factory guard to pay his way through college.

Jamati: How was it received?
Again it was received well by those that saw it. On a trip to Kenya, I noticed that it was in the local stores and people had seen it but what was more pleasing, in one respect, was the response from local South Africans that caught it, and the gradual infiltration of Nollywood into the townships.

Jamati: Do you think Nollywood movies can win international awards in the future?

I have not seen a Nollywood movie as yet win an international award but it will happen! Just as the Indian film Industry has now climbed to acceptable international status it is only a matter of time before Nollywood films reach that height.

Jamati: Often when Hollywood does films about African figures, they don't use African actors. Why is that?

Hollywood is using more African actors now than it has done, but a lot of the time when it wants to cast lead African roles it doesn't, mainly because they are only interested in having a name because that means box office and unfortunately there aren't that many African box office names out there yet, but we are coming!!

Jamati: If you had the opportunity to play the role of an African icon, whom would it be and why?

There are so many iconic figures from this continent I want to portray on film!! But one of my first would be Dr. Kwame Nkrumah, the father of pan-Africanism. His voice /story would be a telling reminder to how we have found ourselves on this continent since the end of colonialism.

Latest Photo Reports
Catch up with all the political quotes from our politicians.
Advertise here
More Interviews
ModernGhana Links
Stop stealing songs – Songwriter to 'lazy' musicians
I Want To Use Music To Connect To My Fatherland — Fadu
Vodafone Ghana Music Awards 2021: Diana Hamilton Grabs 6 Nominations
Ladies are not Ready to Build with any Man...Flora Jacobs
Salma Mumin Debunks Rumour That She Removed Her Butt
WATCH: Travel the world amidst COVID-19 with Jynna Asiedu-Ofei and her Borga Diaries
Teni: Humanity Over "The Industry"
We Had Sex In A VIP Bus---Fameye Recalls Regrettable Experience
All Those Who Made Promises At My Father's Funeral Have Not Fulfilled Even One--Late George Forest Son
TOP STORIES