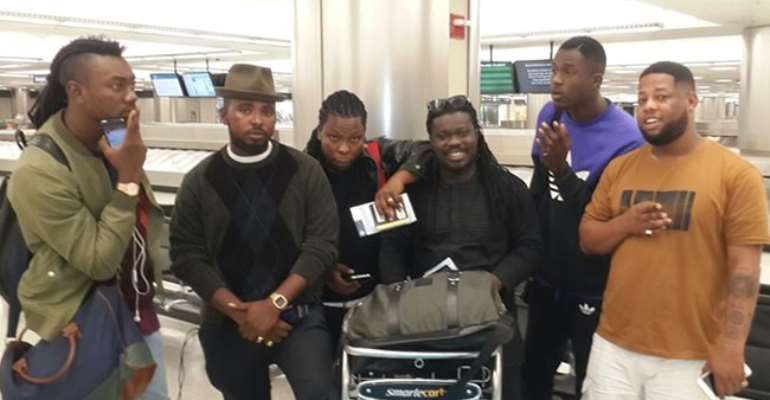 Some of Ghana’s biggest acts have landed in the United States Thursday ahead of the launch of the 2016 Ghana Music Week Festival.

The artistes, including, Edem, Gasmilla, D-Black, Joey B, and Pappy Kojo landed at the Dulles International Airport, Washington DC on Thursday morning ahead of the launch.

On Saturday, October 17, 2015, all roads lead to the B.B. King Blues Club & Grill, in New York, for the official launch concert for the 2016 Ghana Music Week Festival.

Among 11 top artistes from Ghana scheduled to perform at the event are Samini, Gasmilla, Joey B, Pappy Kojo, Edem, Becca, Obour, D-Black, A.B Crenstil with a special appearance by Rocky Dawuni and Bright of Buk Bak fame.

According to Verus Nartey, GMW Executive Coordinator, the main goal of the international launch is “to roll out an innovative package to attract a targeted 2,000 visitors/tourists to Ghana for the main GMW Festival in March 2016, and in the process, market Ghanaian music & tourism to the world.”

Launch activities in the U.S officially promotes the 2016 GMW festival, which enters its fourth edition next March.

The event is organized by the Musicians Union of Ghana (MUSIGA), Showbiz Africa & Fantasy Entertainment in partnership with the Ministry of Tourism, Culture & Creative Arts (MoTCCA).

The festival proper will be held in Ghana from March 1-7, 2016, coinciding with Ghana’s 59th Independence celebration.

Prior to the launch concert in the US, there would be two other activities; an International Media Launch of GMW Festival 2016 at the Ghana Embassy in Washington DC on Friday October 16, 2015; and GMW Durbar at Mount Vernon City Hall on Saturday October 17.

Free SHS Graduates Gather To Campaign For NPP
17 minutes ago