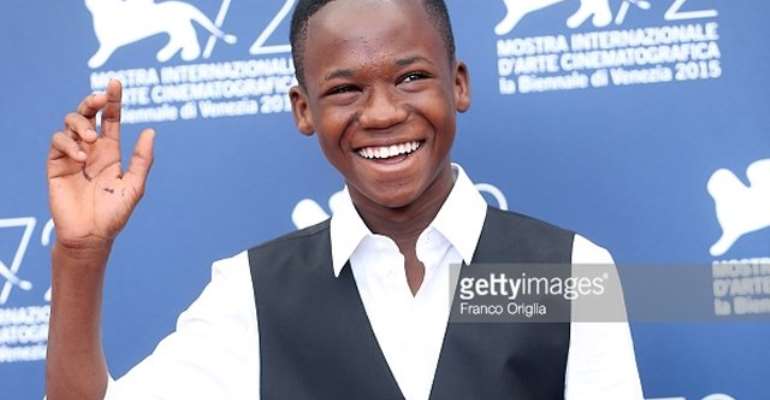 A 14-year old Ghanaian street vendor, Attah Abraham has won the Marcello Mastroianni’s Best Young Actor Award at the 2015 Venice Film Festival. He won the award for his lead performance in a movie alongside Idris Elba.

Abraham who is said to be without any acting background was picked from the streets of Ghana during the shooting of Netflix’s soon to be released movie “Beasts of No Nation.”

According to the Director of the movie, Cary Fukunaga, Abraham was randomly selected on the streets.

Cary Fukunaga said: “The lead in ‘Beasts of No Nation’ was essentially a street vendor before we shot the film. [He had] zero film experience, little education…but he became a somewhat professional actor, which was astounding to watch.

"Abraham’s character joins a militant group from an unnamed West African country that is led by a brutal warlord, played by Idris Elba (“Luther”)."

”The director explained that about 30 of the kids were also selected and we did this theater workshop and tried scenes that were in the script, and we would improvise.

The kids are fast learners, they quickly understood that the better they did the longer they stayed [as potential casts].”

He said Abraham performed extremely well.
“We had a difficult one long take that he had to perform; probably the most intense thing I ever asked him to do in the film. He had six or seven kids around him performing [in the scene], and I watched him become a leader among these kids and make sure they stayed in focus and not f— up the shot so they didn’t have to do it over again. I gave almost no direction to those kids. Abraham was driving that scene."

The director stated that he will not adopt Abraham but will take responsibility for his education back in Ghana.

“For Abraham, he’s only 14 so we had to get him up to speed in school, so right now we put him into boarding school back in Ghana so he can get up to normal 14-year-old academics."

"By nature of us crossing into these people’s lives you have some responsibility there to make their lives better, but at the same time you’re not adopting a child, by any means,” Cary Fukunaga added.

Election 2020: Only Uniform Personnel Will Be Deployed – Gha...
7 minutes ago