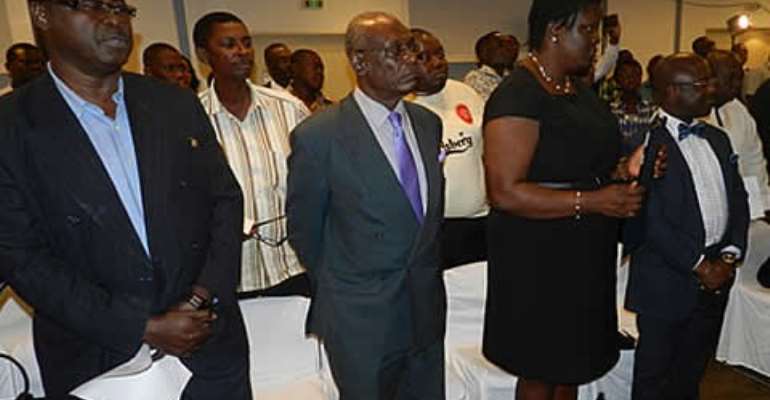 All hands were clasped as if they were handcuffed, feet at attention as though at a parade inspected by a dreaded commander whilst heads swayed in unison from one side to the other as if a strange dizzying disease had struck everybody in the auditorium.

The place was one of the auditoriums of the Novotel Hotel and the event was the launch of Classical Digital Organs by world-acclaimed organ manufacturers, Content Holland.

Whilst fingers danced dexterously on the huge digital organs, the guests nodded like lizards acknowledging praises from the high heavens.

To the untutored ear, the sound emanating from what seemed well polished dual-desks, was meaningless, ear-jarring noise but the lawyers, church and business leaders gathered at the auditorium knew what they were getting and they generously appreciated every recital with thunderous claps.

Speaking at the launch of the digital organs, Mr. Takyi-Micah expressed disappointment that Ghana had lost its appreciation for good quality music.

“I think that we should take music more seriously than we are doing in Ghana; we are overwhelmed with junk music and it is about time that we took another look at our music appreciation,” he stated.

Mr. Takyi-Micah said even though the revived National Symphony Orchestra was probably one of the best in Africa, the disinterest shown by the general populace was disheartening.

He was also worried that music education in the country had been neglected over the years.

When the speeches were done, organist with international repute, Gerban Murrick serenaded the audience to breathtaking recitals.

The evening was made complete with performances by Nigerian international organist, Ibiyefiebo Harry who added an African touch and vigour to the evening's recitals.

His first recital was Obangiji, the Yoruba word for adoration, praise, thanksgiving to most High God. The recital sounded very much like the name; it kept many aggressively and violently thumping their feet.

He concluded his four recitals with the familiar Amazing Grace which got many snapping their fingers and stretching their feet as if they were playing the giant instruments.

The evening was crowned with the Methodist Hymn Book 260, sung by the excited audience who sung with obvious enthusiasm.