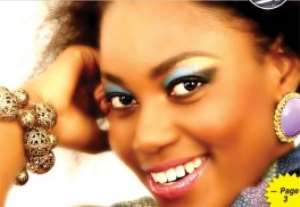 When film producers imposed a one-year ban on sultry actress, in December 2010, many observers may have thought that her career would be disrupted and she would be sitting at home all forlorn licking her wounds. Wrong.

In fact, the 6ft tall movie star insists that the year 2011 has been the most busy time of her life.

In an interview with Graphic Showbiz last Saturday, the popular actress said unlike other times when she had to wait for roles from producers, last year was different. “I will say it was my busiest. I shot close to 10 movies in both Nigeria and Ghana. I also came out with a hairline which is yet to be launched and opened my shop, NY Closet.

“If those who claim I have been banned couldn’t serve me with an official letter, then what are they talking about? You see, a group of people cannot just wake up and say they have banned an actress. Probably the worse they can do is not to feature me in their movies, but they cannot say they have banned me from acting”, she said.

However, something that bothers the Human Resource graduate of the Central University College is what she terms as false stories about her in the newspapaers.

“ It amazes me how some of these papers come about such stories. I feel very bad reading such things that I am rude among others but I try not to allow them to affect me. I have friends, family and church members who get worried when such things happen and that bothers me.

“Most of these stories are not true but I can’t stop any journalist from publishing stuff about me. It is only fair that they also seek clarification from me before going to press.

Asked whether she has taken any action against any of the alleged false publications, she said “ I can’t go around chasing reporters but I try to clarify things whenever I get the opportunity. I have grown to learn that, the more you defend a false story, the more it’s talked about. So you are better off ignoring them most of the time.”

Yvonne who is often described as sexy doesn’t think she is sexy. “ People say I am sexy but I do not see myself as such. Maybe I am sexy on the screen because of the make-up and the clothes I wear. Off screen, I am just an ordinary girl. I don’t feel I am sexy.”

Asked what she likes about herself, Yvonne said her nose is her best asset. “I believe my nose is very beautiful. I used to like my legs at first but I now love my nose. My stepdad used to tell me when I was young but I just realised it myself”.

Yvonne who has featured in over 50 movies hopes this year will be as good as last year or even better.” I thank my fans for making me who I am today by patronising my movies”, she said.