MISS WEST AFRICA INTERNATIONAL 2011; THE HEAT IS ON

By Face of West Africa 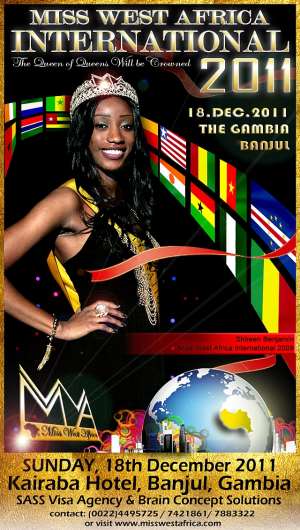 As opposed to a competition, the organisers have described the most anticipated beauty pageant in Africa as a celebration of beautiful African queens. The show is set to feature celebrity west African musicians as well as Gambia's best cultural performers which fans around the world can watch live online or via some TV networks. Also, people can expect to see a totally different type of pageant in Miss West Africa International. The girls participating in Miss West Africa International are already crowned queens, they are already winners, and they have all begun activities for the progress of their countries, they have already been through the standard style of pageantry. So on the night, we will be bringing them together to be congratulated in a celebration of West Africans culture and beauty.

Nevertheless, one girl will fly home as the successor to the acclaimed Shireen Benjamin who won Miss West Africa International in 2009. An international queen will be crowned in an event consisting of queens from 24 countries, 18 of which are West African countries and also queens from the UK, USA, Italy, France, Germany and Canada. Organisers say it was an outstanding idea to include queens from outside of Africa due to the large number of Africans living abroad wanting to be a part of this celebration of their culture. The events abroad have been a great part of enlightening the foreign world and drawing attention to West African culture and tourism.

All the queens will be arriving in Gambia on the 13th of December, where they will be greeted by great cultural artists and performers in Gambia, TV networks, Gambian diplomats and ambassadors. Throughout their stay at the Kairaba Hotel, the girls will be filmed by national television networks as well as having their experiences and Gambian tour documented for TV and the 2011 DVDs. Currently, all the queens are working towards the international title engaging in charitable activities shown on http://misswestafrica.blogspot.com, which also allows the public to vote for their favourite queen. The West African beauties are also fundraising for their participation and calling on all generous supporters to open their hearts to their efforts. The organisers are also opening sponsorship opportunities and media partnership for businesses that wish to assist any of the queens.

“Miss West Africa has opened the hearts and minds of many to learning more about other West African cultures. Our focus has always been on promoting West African tourism, business and culture. In our third year only we are in 24 countries with 16 events. And we appreciate all the support from various tourist organisations and the day to day Africans. We are proud to be making history.”

For more information on Miss West Africa visit www.misswestafrica.com or contact below.

IMAGES OF MISS WEST AFRICA QUEENS AROUND THE WORLD

Odododiodoo: ‘Impotent’ Police Cause Of Constant Clashes – ...
27 minutes ago