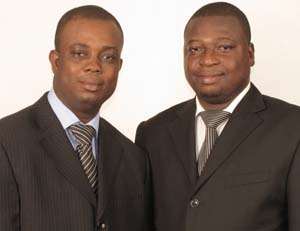 Anointed Brothers, a talented Ghanaian gospel duo whose music has gone down well with a large number of music lovers in Ghana, is working tirelessly to climb to the top of the ladder in the music industry.

Following the footsteps of internationally acclaimed artistes like Ben Dube, Kirk Franklin, among others, the members of Anointed Brothers, who have assisted several musicians to make it big in the industry, believe the time has come for them to show the world the kind of stuff they are made of.

The duo is made up of Bright Formedja and Mawuli, who have been together for over 20 years.

Bright and Mawuli, who have been groomed into professional gospel music icons, are set to release their 10-track CD album.

The album contains inspirational and soul soothing songs and most of the songs can be considered as good gospel music fused with good rhythms and danceable beats. The instrumentation, as well as the backing vocalists, make the songs on the album exceptional.

Known for their mid-tempo gospel flair, soulful arrangements and stunning vocals, they have been performing a range of original songs which inspire, amaze and leave the audience exhilarated any time they are on stage.

They have performed alongside some of Ghana's top artistes including Joyful Way, Pastor Joe Beecham, Cindy Thompson and more. They have also appeared on numerous radio and television programmes.

The members, who claimed they developed a strong passion for the development of Ghanaian gospel music, said they were ever ready to help promote gospel music onto the world market.

Indeed, music pundits and industry players who have had the privilege to listen to the songs on their yet-to-be-released album have described it as an instant hit.

Those looking for good songs to listen to will love 'Nhyira' , which has soul touching lyrics which are good enough to make waves on the gospel music scene.