Fans Fall For Stars Of The Future 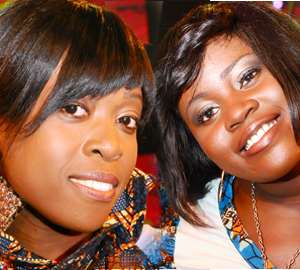 IT was a rapturous moment of ardour, exhilaration and passion last Thursday night when the remaining six contestants of Stars of the Future took to the performance stage to dazzle the several hundreds of patrons in another series of performances.

It was a night which saw the National Theatre erupting with romance, love and affection as the contestants – Kwame, Emmanuel, Abby, Daniella, Kaki and Noella – sang from their hearts to the appreciation of the audience.

On the performance day dubbed 'The Night of Ballads', the audience were treated to two sets of performances. First was the individual performance from each contestant, followed by duets by a pair of two.

Kwame got the night going with his unique rendition of 'When a man loves a woman '. The two-time winner of the Golden Moments Award got himself back into the competition as he did the best of Michael Bolton's greatest hit.

His act was just refreshingly spectacular and a signal to the night's attendees of the great night they will be experiencing.

Noella came on stage looking gorgeous and classic in a black gown. Her performance of 'My heart will go on ' by Celine Dion was a shocker to the entire audience. She had everything going for her as she exhibited her exceptional vocal dexterity. It won't be a surprise if she wins the top performer award for this week.

Very passionate with a soul for singing, Emmanuel produced an amazing performance to get the crowd rooting for him. His costume was splendour. He was on point and managed to pull through with ' Unchained Melody ' by Righteous Brothers.

Abby and Kaki had it right and proved to be in the race for the ultimate as they respectively did justice to Jennifer Hudson's ' And I am telling you' and 'I will always love you' by the songstress Whitney Houston.

Daniella had a fantastic showing on the night, going with a Whitney Houston classic and thus compounding the job of the judges. The big question is who gets evicted after such a great night?

This will come to light at the eviction show on Tuesday night before the next performance night at the National Theatre on Thursday night.

Patrons are encouraged to come out in their numbers on Thursday night to support their favourite contestants and also vote to keep their favourites in the competition by texting their names to the MTN short code 1750.

Stars of the Future season five is sponsored by MTN with support from Somovision LG, Close Up, Vodka Kick, Koala, Spa 216 and GTP.

The weekly eviction shows air on Tuesdays at 9pm on e.TV and 9:30pm on GTV. Those who miss the TV series can catch the radio series of SOF 5 on YFM every Monday at 7pm sharp. One can also follow their favourite delegate on facebook.com/starsofthefuture.