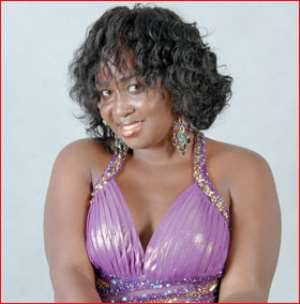 FORMER BIG Brother Africa housemate, Abu Andani is expected to officially announce her music career this Saturday with the launch of her debut album 'Music In Me' at the Silverbird Store inside the Accra Mall.

will sign autographs and grant photo opportunities to fans. She will also use the occasion, which is expected to be star-studded, to talk to the media about her album and her future prospects. She will then answer questions from her fans.

The event will kick off at 9:00am and end at 5pm. The launch will be climaxed with an after party at the Tantra Nightclub in Osu where will mount the stage for the first.

There were media reports earlier this week which quoted as saying she believes her stagecraft is better than that of all the other Ghanaian female circular musicians.

Her performance on Saturday night will be the first test of her statement.

Other artistes expected to perform at the after party are Dela of mentor fame, Jane Awindor, Caroline, Tinny and Chemphe, while VIP and 4x4 are also likely to pass through.

All eyes will be on come Saturday. By Francis Addo

Hottest Photo Reports
Catch up with all the political quotes from our politicians.
Advertise here
More Hiplife News
ModernGhana Links
Money can do everything — Kweku Flick on why he can’t stop singing about money
TiC drops super artwork for new song featuring Kuami Eugene and Okyeame Kwame
SIL: Buju Delivers An Exhilarating Intro
'Many Ghanaian Artistes Don`t Want To Pay For A Better Sound Quality' - DDT
We've Taking Over and Don't Need Anyone's Validation - Phrimpong speaks about Kumerica
Speeding to the world: Agona Swedru Boys Give New Hope to Drill on The New Chapter Project
‘I'll be the first to bring Grammy award to Ghana’ — AY Poyoo
D-Black’s ‘Loyalty’ to the game unmatched as Loyalty album drops
I'm the father of Hiplife — Rockstone speaks up
TOP STORIES

I won’t be an impediment to free, fair and transparent elect...
32 minutes ago