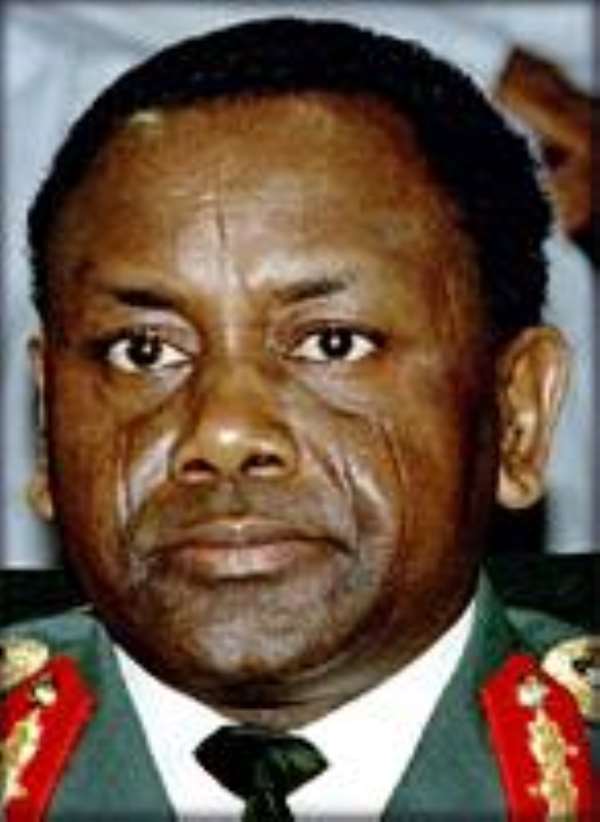 A gang of suspected armed robbers, on Wednesday night, besieged one of the homes of the late General Sani Abacha in the metropolitan area of Kano, shooting the last son of the departed ruler, Alhaji Al-Mustapha Abacha somewhere near his stomach. A police source told Daily Sun that apart from Al-Mustapha, other persons sustained injuries, adding that those injured have been rushed to an undisclosed hospital.

Daily Sun was told that the shootout was sequel to the prompt response by Abacha's bodyguards complimented by the resourcefulness of the police officers from the Nassarawa Police Division, whose office block is a stone -throw from the scene of the gun battle.

The incident happened at about 6.30pm at one of the Abacha's properties, located on Bank Road in Nassarawa area. Members of the Abacha family, especially Mohammed had, from time to time, quartered themselves in the brick-painted building as an alternative to the family house situated on Gidado Road.

The five-member gang, it was gathered, came in a grey coloured End-of-Discussion Honda car and quietly made their way into the compound where they accosted Hajia Zainab Abacha, one of the daughters of the late General and demanded for money.
It was learnt that Zainab had no immediate cash to dispense with and was in a fix trying to negotiate a way out when things suddenly went out of hand.

The source told the Daily Sun that when the robbers took over the big house, they first arrested everybody within sight and seized all their handsets to ensure that none of them could contact the outside world. According to the source, unfortunately for the robbers just when they were certain that everybody was under check, the unexpected happened. They did not realize that not everybody in the building at that moment had been arrested.

The source said that Al-Mustapha was actually in the kitchen, eating a light meal when the tragic scene began to unfold in the house. Hiding in the kitchen he secretly put a distress call across to his elder brother, Mohammed, but was caught in the act, a reason he was instantly shot.

The source went further to state that Mohammed, on getting the message, quickly alerted their bodyguards as well as called in the police for help, leading to both teams storming the building within minutes. One of the robbers was arrested after he was shot twice in the leg as he made his escape from the troubled spot. The first shot came from the officers from Nassarawa Division while the second shot came from the bodyguards who gallantly defended their principal's interest. Equally, some guns, were recovered from the robbers as they dropped everything on them and fled for their lives. The End-of- Discussion Honda Car used for the operation had been taken to the Bompai Headquarters of the Police Command.

The state Police Commissioner, Mr. Ibrahim K Idris has visited the scene of the crime to make a personal assessment even as it was gathered that the arrested suspect has been cooperating in the investigation. State Police Public Relations Officer, ASP Magaji Majiya confirmed the robbery attack on the Abachas and said that, the police responded quickly and positively, adding that the robbers did not take any property out of the house.

He also said that investigation is in progress, even as he assured the people of the Kano State of the readiness of the Police command to secure life and property.