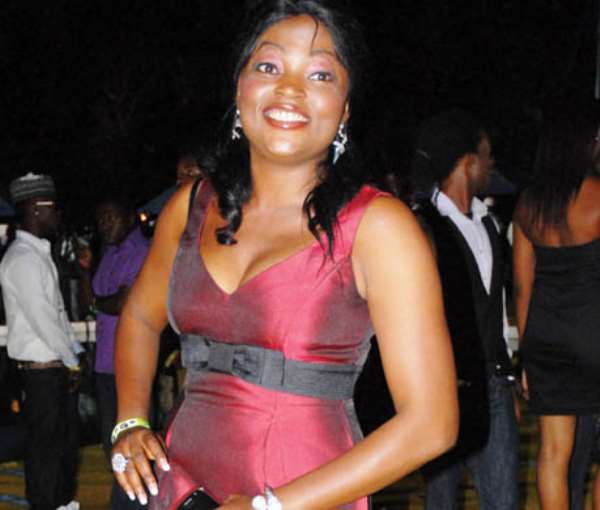 The superstar actress has risen, in such short time, from just one of the numerous actresses around, to become 'the' actress – thanks to her movie Jenifa, which catapulted her from obscurity into mainstream prominence.

Now a Globacom ambassador, and a multi award-winning actress-producer, the UNILAG alumnus is back with a new project The Return of Jenifa (TROJ). And, one week after a star-studded premier in Lagos, the star actress sat down with our correspondent for a quikie

How do you cope with so much work?

It's by the grace of God. I sleep like seven hours in the night and crash like one hour in the car.

I have to because of the stress of my job. We're always on set acting. The light is really hot. And it won't be good if you don't eat and sleep. So I try my best to eat and sleep well. I need that energy to keep pushing on.

Let's go way back, probably to the time you were born. Give me a brief description of your family. Where you grew up?

I grew up in Lagos, I come from Lagos. I have three siblings. Two girls and a boy.

Where in Lagos did you grow up?

Somolu, Surulere. My mum is a gynaecologist, my father, an educationist. Growing up was fun, I was more of a tom boy, playful. I had fun.

How much did television at that point in time influenced you, your mum being a gynaecologist and dad educationist, were they strict? Did you have access to TV, comics?

Let's fast forward to when you were featured in the very popular 'I Need To Know' series. How did that come about?

Well my first experience for the camera was on Opa Williams set, 'Naked Wire'. I featured in a film.

How did you get the role?

I just attended the audition and Opa Williams is such a gentle man. I heard about the audition then, I was given a role. After then, I was on I.T at APCON I just told my boss, 'oga I want to go for this audition'. He was like, 'go, go, go'.

How old were you then?

I was past teenage years. I went, and I got a role.

So in the series you had to play down your age, the character in the script was quite younger than you were. How did you manage it?

The other people you were working with they were also playing younger roles.

Yes, they were young. They were fairly young.

So they were playing their part.

Yes, they were young. They were teenagers. Averagely you were above their age.

How long did the series last?

Still on air. It lasted for two to five years.

I think the first two, three years was very fantastic. And I don't know what happened.

They brought in new people.

Trying to get roles.

Tell us about it…

That was a very trying moment. It was really tough.

So you went straight into Nollywood?

Yes, I went into Nollywood. I met Kunle Coker. He helped me to get roles. He was supportive. But it was difficult to get roles on television. You'll talk, talk, read, read, but they wouldn't give you the role.

Why didn't you move straight to series that were airing on TV as at that time?

So you rather went for Nollywood?

Yes, when I didn't get the big break.

What was the first Yoruba movie you featured in?

It was Kolade Alabi's 'Iroka'. The producer told me about the movie at an event. I was part of the movie in Osogbo. I played a very minor role. It was in Ayo Adesanya's 'Heart Breaker', after then I crossed over to the faculty where you have Yinka Quadri, Ogogo, Abe Lanre, Yemi Alabi. They welcomed me, featured me in their movies, and I started my first major role. My first lead role was in 'Ojo Ketala'. Coincidentally, that was my first experience as a producer.

So almost immediately you became a producer. Where did you get the experience from?

I believe I could do it and I started it. I watched how they did it. I've been on different production sets and watched how they do it. They call people from different departments, different professionals. Finally I wrote my script, I invited the director of photography and the director. How are we going to do this, call this make-up artist, call this wardrobe person. And I gathered them together and we did the movie.

Prior to you featuring in Yoruba films, you've been reading scripts in English. What was it like speaking Yoruba in a movie?

Who invested in your first movie?

So she believed so much in you.

She believed in me

How about your dad?

My dad wanted me to be a lawyer. So my father would just tell me then, 'go back, go to school, go and study law'.

How does he feel now?

Now he's cool with it.

Are you going to consider practicing Law?

As it ever crossed your mind to make your dad happy?

Please I don't practice Law? But it reflects in my script. It's good that I studied law. It helped in writing my scripts.

Like if you watch my films it's all about crime rate, arm robbery like when they want to start a case in court and all that. It helped.

So after 'Ojo Ketala', what was the next movie?

After 'Ojo Ketala' I did, I think 'Etanu'. I met Hakeem Balogun who's become my best producer since date.

So how many films have you produced?

What Inspired the Jenifa Movie?

I just felt like impacting the youths with a solid message. A lot of girls out there do things they really shouldn't. Some are 'aristos' and stand the chance of losing their lives through dangerous ways – including contacting HIV. And other things that should be set straight, I wrote the movie myself.

Why take the comedic route to preach such a serious message?

I felt I should talk about sustaining good morals but in a way one would laugh but still walk home with a message. 'Jenifa' isn't boring, so you will watch and equally get the moral of the story at the end.

Yes I did, but couldn't find anyone. Ronke Oshodi almost fit the role but she was too big in stature for Jenifa's character. I wanted Jenifa to be smaller in size. I had to play the part when I couldn't get anyone to fill up the role.

Tell us about the 'Omo Ghetto

Yes. I did Omo Ghetto to reach out to young people in the ghetto. That they can be responsible, they can use their God-given talent and acquired skill to better their lives, of their family and that of the nation. Because a lot of people from the ghetto – the pick pockets, touts, the young people that came to rob me when I was shooting Omo Ghetto, are so young. So young!! It was sad, but we thank God. I'm alive.

Did you try talking to them?

Yeah, yeah, even when one was trying to hit me, but his accomplice started begging like, 'ema fo wokan yen o'. I felt so bad, so sad for them. I heard they've been arrested you know. And I feel bad. I hope they'll change. I hope they'll be given another chance. You know these are supposed to be the leaders of tomorrow, why waste away? Those are the people that inspired 'Omo Ghetto'.

What inspired your passion for Nigerian youth?

Urm, I had an experience before Jenifa. I met this young girl. I think she's living in Ijora. A very pretty girl. She speaks good English. She went to a public school. She knows how to braid hair. And she's trying to get back to school. I met her. She's so close to me. And I would give her money. 'Are you okay?', 'how are you?'. So I met this young girl, and I think she's got a good heart. I can do something for the young people. Why can't I reach out to them through my movie and my N.G.O, The Jenifa Foundation? That's how we started.

Laughs. Everything came together. The only thing I can say is that I'm happy to be a Glo Ambassador. Glo is for the gbo gbo bix girls. And we have a lot to offer our subscribers, check out the…

Which part in Lagos?

Because I knew what I wanted to do. And everything's by God grace. Not by might.

Would you still create more characters, more movies for Jenifa? I mean there's a 'Return of Jenifa'. Though it kind of shows a sense of ending.

For now, but tomorrow. Like Madea, Madea was in 'I Can Do About Myself', she's was in 'Madea's Happy Family', we loved Madea, but she's crazy. She's got something for you.

Not because of that. Because of his work.

Because of his work. When did you start following up?

I can't even remember.

We're resting. Keep your fingers crossed. The energy that we put into the 'Return of Jenifa', oh my God, it was crazy, it was challenging, it was tasking. Getting all the cast together. To even get the content. It was a big job. Don't forget the expectation was also high.

How much do you charge for a movie role?

Ah, I can't mention. It depends on the person. I can even do it free of charge. If the script is so strong and it's something I can handle.

Have you ever thought taking up a role in Hollywood? Something not in Nigeria.

We all want to.

Have you gotten any call?

You haven't gotten any call?

Laughs. Okay it was nice speaking with you.

God bless you dear. Osagie, thank you for coming.