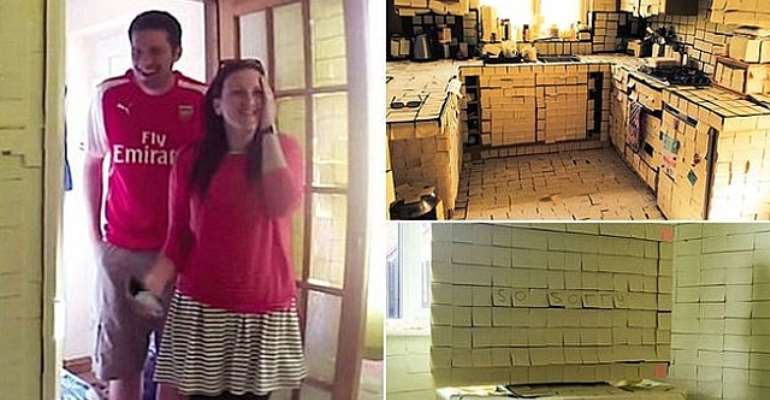 Meet Jamie and Emily Pharro, newlyweds from Lincolnshire, England. After their nuptials on Aug. 1, the pair handed their keys over to friends to look after their cats while they were on their honeymoon.

Upon their return from a glorious holiday in Italy, the Pharros found that their prankster pals had arranged a   noteworthy welcome   — in the way of 14,000 Post-it notes covering the first floor of their house. The sticky pieces of paper covered the entryway, the living room, and the kitchen.

A hidden camera captured the reactions of the new Mr. and Mrs. Pharro.

“Our living room has got glass panels in the door, so we could see as soon as we got inside what they'd done, and then we saw the camera,” Emily Pharro, 29, told the Daily Mail. “The notes were all over the living room walls and everything. I think that in a few weeks, we'll still be finding the odd one about!”

View photo
.
It had taken their friends eight hours to pull off the sticky act. As for what mischief-makers had to say about it: They let the notes speak for themselves, with a message left on the television that read, “so sorry.”

The couple said they expected a surprise upon arrival. After all, the same group of friends pranked another couple returning from a secret wedding by filling their home with 3,000 balloons.

It took the newlyweds 2½ hours to remove all the sticky notes.

Police smoke out Shatta Wale, handcuff him for faking gun at...
25 minutes ago