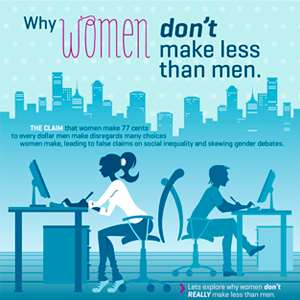 “Women make $.77 for every $1 men make”–Common Stat
It's true, but only if you don't account for:
Occupations
Positions
Education
Job tenure
Or hours worked per week

So what's really going on?
Expectations and Sex-based stereotypes push [1]
Men towards STEM careers.
Women towards “pink-collar” health and education jobs.
Or men in people-free projects
women in caring professions.

The real wage gap is explained by common choices by gender.
Like which college major you choose.

Based not on gender discrimination, but choice of college major.

Whether you work more at home, or at work:
Women take on more unpaid work at home than men.

Almost all tenured professors receive maternity/paternity leave.[5]
Yet 12% of fathers took off paternity leave
While 62% of mothers did.

How much you sacrifice for your kids:
Working mothers report greater difficulty advancing careers than working fathers.[7]
% with children <18 who say parental role makes it harder to advance.
Working Mothers:
Harder-51%
Easier-2%
No Difference-46%
Working Fathers:
Harder-16%
Easier-10%
No Difference-72%

With drastically increased % of women:
In the labor force
With college degrees
In upper management
Earning the same amount as men.