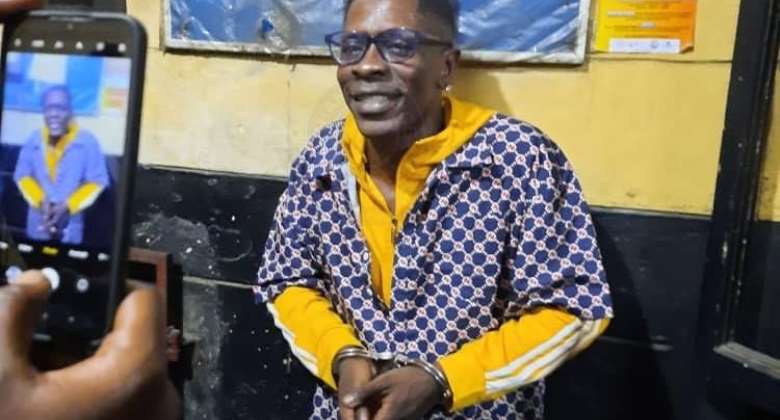 The Ghana Police Service has dispelled rumours that dancehall musician, Shatta Wale has been granted bail.

According to the Service’s Acting Public Affairs Director, DSP Alexander Obeng, the artiste is still in their custody with two others assisting in the investigation.

This comes a day after he was arrested following his alleged fabrication of a story purportedly been shot by an unknown assailant on Monday night.

“The investigators are ensuring that the right procedures are followed so that nobody’s right is violated,” he said on Wednesday, October 20.

Over the past few hours, social media has been inundated with speculations that the singer who was arrested for fabricating a story that he had been shot by unknown assailants had been let go.

These assertions have mostly been accompanied by amateur footage of some industry colleagues walking on the corridors of the Police station.

But speaking on The Pulse on the JoyNews channel, the Police indicated that the self-styled dancehall king, the pastor, and two others are still going through the necessary processes in custody.

DSP Obeng explained that they are expected to be charged and processed for court in line with the security service’s modalities.

He also revealed evidence available to them suggests that the musician’s charges may be pivoted around “publication of false news, usurpation of a public officer…and attempts to cause fear and panic.”

Born Charles Nii Armah Mensah Jnr, Shatta Wale explained that he undertook the action on the back of a prophecy by Bishop Stephen Akwasi, who predicted his death.

In a viral video, the Founder and Leader of New Life Kingdom Chapel International noted that Shatta Wale would lose his life on October 18, similar to that of South African reggae artiste, Lucky Dube, who was shot on October 18, 2007.

Shatta Wale stated that he felt his life was under threat, for which reason he vowed that until security agencies step up to address such threats, his whereabouts will remain unknown.

The pastor in question, Bishop Stephen Akwasi, popularly known as Jesus Ahuofe, was picked up by Police on Tuesday, October 19.

Latest Photo Reports
Catch up with all the political quotes from our politicians.
Advertise here
More Industry News
ModernGhana Links
Kumasi theatre will be completed by end of next year – Okraku-Mantey
Nigerian star Joeboy, Reveals The Secrets behind hit song Alcohol, rise of Afrobeats and culture
[Video] My BP shot up when Peace FM disrespectfully sacked me from their entertainment show — Fredyma
[Video] I attempted suicide some years back —Fredyma
WEBA 2021: Check out full list of winners
RTP Award is Ghana’s Grammy — Mahama
Sarkodie presents GMAUK Afrobeats/Afro Pop Song of the year award to Gyakie
Digitize The Creative Arts Industry To Help Generate Revenue To Support National Development - Reggae Artiste To Government
My wife broke my virginity after University in 2008 – Prince David Osei
TOP STORIES