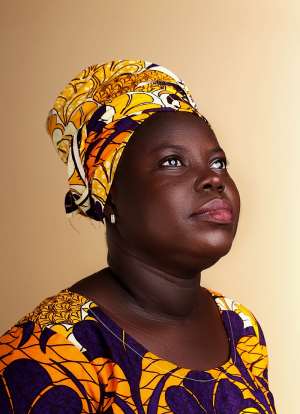 For over two decades, Nana Ama has lent her vocals to many hit songs but has remained in the shadows as a background vocalist in the country.

However, she is now stepping out into the light as an artist on her own, poised to carve a niche for herself.

And she has started that journey with the release of her maiden solo song titled Konongo Kaya.

The Highlife tune, produced by the renowned sound engineer Buddy Roro at RHM Studios in Accra, which came out on Friday, December 18, is a test of Nana Ama's abilities and she lives up to the task with her delivery.

The song written by the Hiplife Artiste, Obofour Raphael, takes on men who don't treat their partners well and take them for granted but are quick to return when all seems to be good for the women.

Nana Ama warns her former significant other to stop trying to win her back after leaving her destitute and helpless when she needed him the most.

According to her, she is in a better place with her new partner and she is not ready to trade her happiness for anything.

For one who has helped people to boogie to tunes from the late 90s and early 2000s with her vocals till date, expectations have been high for Nana Ama on her debut song which she gave a hint of in October this year.

Having backed a lot of the big stars in the country such as Lord Kenya, Barima Sidney, Okomfour Kwaadee, Buk Bak, Yoggie Doggie, The late Bishop Michael Osei Bonsu, Nana Ama mentioned that releasing a song is a fulfilled promise to herself.

Since its release, Nana Ama told Graphic Showbiz that she has been encouraged by reviews, and comments on Youtube and hopes the song becomes popular through promotion in the coming year.

''Finally, I have a song I can confidently lay claim to and that is quite refreshing after being in the industry over two decades. This is the beginning of new things and I'm confident that it will turn out well.

Latest Photo Reports
Catch up with all the political quotes from our politicians.
Advertise here
More from Highlife News
ModernGhana Links
My 'Ethnopop' genre was to push Ghanaian music to the globe — Charles Amoah
Santrofi to share stage with Erykah Badu on Europe tour
Highlife Has Never Died - Naf Kassi
TOP STORIES