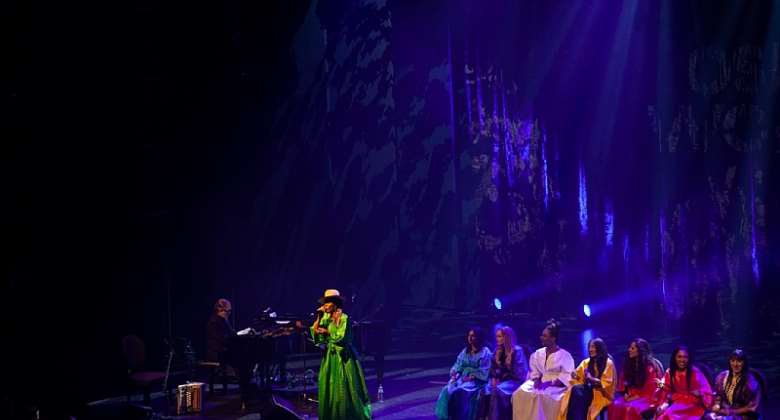 Paying respect and musical tributes to the sounds of the world as hundreds of artistes descend onto Norway for Oslo World Festival 2019, Alexander Stolen and her team, made sure fans, concert and festival-goers were whipped into a 'Utopian' frenzy.

The word which mostly dominated the whole festival was 'Utopia', which stood as the theme of the festival as well. This is the word that served as the pillars upon which this year's festival was founded on.

Apart from inviting different artistes from Africa, Asia and Latin America, Oslo World Festival also added some topical issues to be discussed and debated upon.

These topical issues, seek to form the basis and axis through which mankind, could sort of find some peace and harmony, if well placed and arguably discussed.

Among the topical issues selected, were those bordering on humanity, life and its existence. Issues such as: 'A world with gender equality', 'A world without discrimination based on gender and sexuality', as well as 'A world without racism'.

Given the importance of the word 'Utopia' in this year's Oslo World Festival, a dramatic concert was staged as the opener and curtain raiser to the main festival by establishing the denotation and connotation of 'Utopia.

The rest were Ayo, Liniker, Sverre Indris, Joner and Chango Spasiuk all forming as a band of Utopian Lullabies. The concert served as an eye opener to the world. Because this was the show where all the singers were totally women.

This year, the patrons of Oslo World Festival saw various artistes like Bombino, Dengue Dengue, Dengue, A Tribe Called Red and many others all doing their own thing in terms of their stage-crafts and musical prowess.

One of those in action was DJ Nefertiti, who remains a powerful force as far as African music is part of any serious discussion in Norway or Oslo.

She would not tell her success story to anyone. But sharing the style and culture of her music and Disc Jockeying experience, she said:“ I do not know if there is any secret to my success, but I think it is only about the love of music.

“And for me, I grew up in a musical environment due to my parents playing different genres such as Rhythm and Blues, Somali, Arabic and Pop music in the house.”

“ I also take and see music as a kind of space where I like to go in and play, and have a nice time. So it was only natural to me when I started some ten years ago, looking at the African music situation in Oslo back then.”

With other DJs jumping on the emergence of Pen-drives, Serato, Traktors and other modern equipment that facilitates the art of disc jockeying as an opportunity, DJ Nefertiti is not doing same.

She does otherwise, and in that, she simplifies the question, saying: “ I am 'old school' so I stick to my roots by playing Compact Discs only.”

And as to whether she is afraid or scared of the 'Male-Dominated' environment of the disc jockeying scenes, she said : “ Not at all, because I see myself as equal to them, so we are all DJs.”

DJ Nefertiti loves and listens to all genres of music but according to her : “ When it comes to my sets when playing out, I only stay within the selection of music from across Africa.” And She counts the late DJ Arafat, Black Coffee and Budi Satria as some of her favourites in the game.

Passing through the Interviews' Lounge at Oslo World 2019 was another art and culture personality called DJ Shiba.

In narrating her point of view from Black Major the company she represents, with regards to the African music landscape she said: “ There are so many music out there in Africa that needs to reach out to people outside of Africa, and that is what we in Black Major are trying to do.”

Given the amount of diverse and enormous African music there are, many African DJs are not doing arguably enough in pushing that movement up and forward.

And to that Sheba disagrees : “ I do not think so, because I think there are many African DJs who are not getting the necessary exposure they deserve.”

As to how that situation could be fixed she said: “ I hope, it's up to each and every individual in the entertainment and music industry to do their utmost best for Africa music.”

And bumping into the latest music sensation from Lesotho was Morena Leraba who was getting ready to perform with his band. Looking very traditional and cultured in his trademark clothings, he spared some time for a conversation.

He has collaborated with so many artistes already but no album yet, saying: “ I like to perform my songs live rather than an album but that will come later.

Being a traditional person who is deep rooted in the Lesotho heritage, he said: “ Although my music or song is not yet positioned into any music genre, I still know it is very spiritual and has some lineage and semblances of traditional Lesotho sounds which is the Famo music. But my music will define itself later.”

He mentioned Mathambo, The Gorillaz and some others for their numerous assistance towards his stardom, and also stated the importance and magic of the digital age such as the Skype and the internet as powerful tools in propelling him for more collaborations.

His answer to the public's expectations of his impending show at Bla in Oslo was : “ Lately, people have been interested in my approach to music, because it is cultural based. I am borrowing from my culture which is the shepherd's culture.

“Although on the internet they cannot understand the language, most still say they think I am on the right tracks and doing the right thing, so I should keep it up, and now I am here in Oslo World 2019 and ready for a great performance.”

Through Oslo World Festival, Norway as a Nordic country, arguably looks to be pulling its extra factor in the light of travel and tourism. And some Norwegians are enjoying the bigger picture in terms of the arts and culture of international musicians and delegates on its lists.

If anything, this year's Oslo World Festival opening concert by all female studded ensemble, has somehow defied the masculinism of the music industry to some extent, both in content and programming.

And the question which still remains questionably questionable is that, has 'Utopia dislocated 'Dystopia? And can anyone who saw the festival, say Oslo World is a treasure hunt for new and old sounds from across the world?