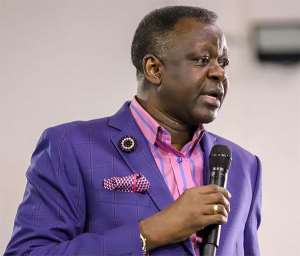 Rev. Eastwood Anaba has decried rivalry among entertainers, footballers and pastors, describing the act as “meaningless”.

Preaching on the topic 'wisdom from the unclean spirit' at the 2019 International Youth Empowerment Summit (IYES), the pastor stated that even demons learn to cohabitate without destroying one another.

Admonishing youth gathered at the event held at the National Theatre, he quoted Luke 11:24 to buttress his point that unclean spirits are wise enough to co-exist peacefully with one another.

“When the unclean spirit is gone out of a man, he walketh through dry places, seeking rest; and finding none, he saith, I will return unto my house whence I came out. And when he cometh, he findeth it swept and garnished. Then goeth he, and taketh to him seven other spirits more wicked than himself; and they enter in, and dwell there: and the last state of that man is worse than the first,” he read from Luke 1:24-26.

According to the founder of Fountain Gate Chapel, seven demons dwelled together, but human beings cannot live together without fighting one another.

Rev. Eastwood Anaba described the unhealthy rivalry among humans as unnecessary and advised that the world learns from the wisdom of the unclean spirit.

Other guests who spoke at 2019 International Youth Empowerment Summit (IYES), which was organised by Pastor Brian Amoateng, were Archbishop Nicholas Duncan Williams, Emmanuel Asigiri (CEO of the National Youth Authority), Sarkodie and many other public figures.