Shatta And Stone, Learn The Art 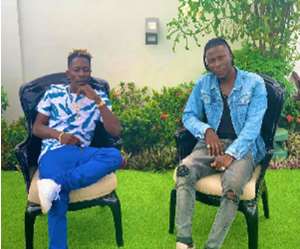 I have been if not the first, will be among the first to condemn the scuffle that ensued between two combatants for the position of "Dancehall King" in Ghana at the Accra International Conference Center.

In my weekly Revolution Broadcast right after the fracas, I'd condemned Shatta Wale for 'unwisely' mounting the platform in the name of "congratulating" Stonebwoy during which time the latter was crowned Dancehall king for the 20th edition of the Vodafone Ghana Music Awards (VGMAs).

I had in like manner called it madness, folly and ignorance for Stonebwoy to pull a gun in the name of "self defence" at such a public place.

Following that, the day after the display of foolishness by the named two, whose motive it's not to promoting Ghana music, but that of Jamaica, right-thinking Ghanaians denounced the doing of these sworn arch-rivals.

I've in conversations with friends and in my writings compared these two guys to the likes of Nana Ampadu, Osibisa, Akwasi Ampofo Agyei, Daddy Lumba, ET Mensah, Agya Koo Nimo and other great Ghanaian composers who marketed Ghana abroad through their music but lived a gentle life worthy of emulation.

Even, to those who come to me to learn the Art of Music, one of those is my page Lemma, I'd said: "Daddy Lumba and Nana Akyeampong had beef between them. Exdoe and Chicago had a beef between them and a lot of such examples in contemporary Ghana music, but none of them used violent means to outgrow the other. They did that through their artworks.

Between Lumba and Nana Akyeampong, their fans do expect songs that slants the other, and we all enjoyed that. Of course I was on the side of my namesake: Charles Kwadwo Fosu (Daddy Lumba). I am Charles Yeboah.

Slants in the art had also been witnessed between Chicago and Exdoe, and same did their fans enjoyed it.

But no, these two crop of musicians do not get for their fans what will thrill and challenge their thinking, but as it's in them promoting Jamaican music, they are as well promoting the Jamaican ghetto-style gun-wielding life.

Such is unghanaian, and subculture to our Ghanaian heritage as " peace loving people ".

But today, the 8th of June, 2019, Shatta Wale has given me some glimpse of hope. I read it that he's been crowned "Dancehall Naa" by the Chief of Tamale.

Picking the beef from there, Stonebwoy should drop his gun and visit Togbe Afede in Ho for "Dancehall Togbe", or to Osei Tutu in Manhyia for "Dancehall Nana".

Better still, as a courtier in Vasco the Wise's Court in the Goka Kingdom, I could bring my influence to bear for him to be crowned" Dancehall King of Abamprede". Here, his teeming fans will welcome him as a king indeed, and our doors would also not be closed for Shatta Wale, for the kingdom bestows titles on industrious Ghanaians whose influence build for better future in the youth.

Yes, this is the Art - the art of music. This is how beef in the creative industry is to be waged and won in the age of brainpower defeating blow-power.

Stonebwoy and Shatta Wale, you've benefited unsolicitedly a counselling of a lord, a courtier. Let it fall on fertile soil, and in yonder, as Ghanaians of goodwill starts erecting the fallen walls of our Republic, you'll be pillars that on your broad shoulders will carry a heavy load.

Your fans love you, don't let them down with a show of indiscipline. Be worthy ambassadors for Ghana Music and the Creative Art Industry.