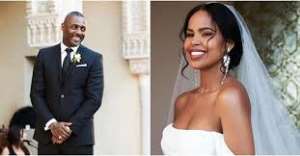 One of the biggest news this weekend was Hollywood star, Idris Elba and Sabrina Dhowre’s 3-day lavish wedding in Morocco.

Nigerian superstar, Davido was present to dish out his hit songs to the Idris’ wife as a surprise package and it was so special.

According to Efe Ogbeni who shared the back-story of Davido’s performance at the wedding, ‘Idris Elba told him

“Efe l want kid bro Davido to come surprise my wife, this cannot leak, and we can’t have anyone know“. So my team had to do a major operation – missing luggages, wrong suits, 16 hour flights, David did his thing, and boy was Sabrina Dhowre surprised’.

Elba, 46, got down on one knee and proposed to Dhowre, 29, at a screening of his own film, Yardie, at a cinema in Dalston, East London last year. Dhowre, who was Miss Vancouver 2014, met and fell in love with Elba while he was in Canada filming his movie ‘The Mountain Between Us’.

According to British Vogue , the pair tied the knot at the Ksar Char Bagh hotel in Marrakesh, one day after hosting an extravagant rehearsal dinner at Amanjena on Thursday.

“Efe l want kid bro @davidoofficial to come surprise my wife, this CANNOT leak, and we can’t have anyone know “ my goodness, @missamadi myself @ronawigs2.0 @oronde had to do major operation . Missing luggages, wrong suits, 16 hour flights, pj ✈️.. OBO 👑 did his thing, and boy was @sabrinadhowre surprised …. powered by @stealthmgmt “always for fam, we take that seriously “Davido 🙏🏿🖤🙏🏿

Idrissa Akuna Elba OBE is an English actor, producer, director, musician, DJ, and rapper. He is best known for playing drug trafficker Stringer Bell on the HBO series The Wire, DCI John Luther on the BBC One series Luther and Nelson Mandela in the biographical film Mandela: Long Walk to Freedom.

Minority Boycotts State Of The Nation Address
28 minutes ago