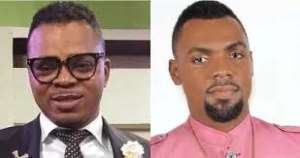 Controversial pastor Bishop Obinim otherwise known as Angel Obinim has stated in a new video that, he no longer work with one of his junior pastors known as Pastor Kingsley Baah aka “One Blow”.

The junior pastor was accused of taking some gifts which include range rover, plot of land and cash from his rival man of God, Rev. Obofour.

In the video, Obinim says he cannot hate his former pastor for accepting the gifts but he has handed him over to Rev. Obofour as he’s no longer interested in working with him.

Earlier on Angel Obinim shared a recorded phone call conversation he had with One Blow who apologised indicating he had no idea Rev. Obofour was going to give him those gifts.

After Rev. Obofour dashed those gifts to the pastor, there have been mixed reactions, with some questioning why Obinim never got him a car after serving him for all those years.

From the look of things it seems poaching doesn’t happen in just the entertainment and business field but also in the church business as well.

Watch Obinim’s reaction in the video below: