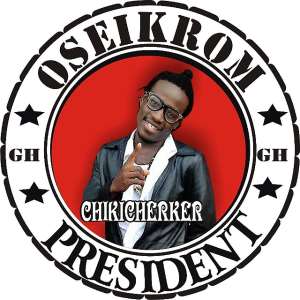 Yes Sir, is a response in an everyday language is associated with an experience that involves a Master and Subordinate relationship. When a musician uses such a catch phrase that solicits response with YES SIR, that individual has to have abundant artistic skills. Yes, of course, for those of you who have listened to some of his tracks and remixes, this young man is a true star in the making. Today's HIPLIFE CHRONICLES feature a conversation with a young musician who is making waves in the Ashanti region in particular and Ghana in general. He is known as the new Oseikrom President. To find out why he has that name.........here are excerpts from our interview

According to him he chose the name, Abusuapanin because, "rap ABU na ma SUA ab3 y3 PANIN"

Abusuapanyin attended and graduated Junior high school at the famous and prestigious Elshaddai Model School. He then went to Kumasi Technical Institute (K.T.I) where he became the Entertainment Prefect in 2004/5 academic year. He furthered his education at K.POLY to do a technician course.

Recorded his first jingle for AUTHENTIC Sports of KAPITAL radio Kumasi in 2000.

Demarco=I love my life He has done mixtape of Skatawaka, Mixtape of One I love by Sunshine De boy,J Martins iva iva etc

In discussing Classic Highlife music, he mentioned his collaboration with some top musicians in Ghana including:

Currently he is out with a single and is focus is on its promotion. In his own words : "I am now tryin to promote my new single called ME Y3M BA"