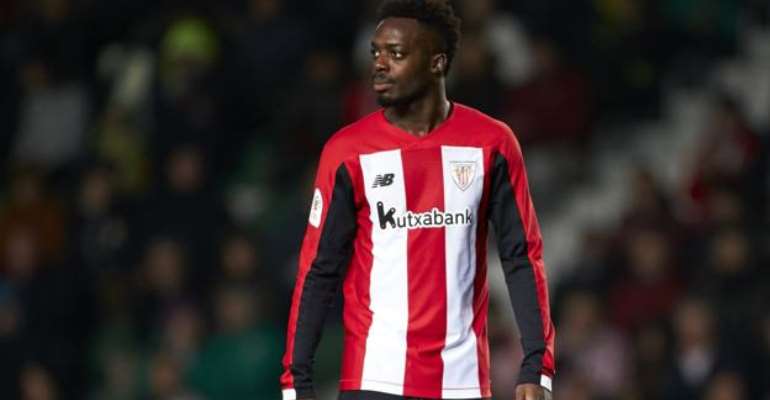 Athletic Bilbao forward Inaki Williams has said he was racially abused during Saturday's 1-1 draw away to Espanyol.

Williams, 25, who signed a nine-year deal with Athletic in August 2019, said: "No black player or any player ever wants to hear that."

In a separate incident on Saturday, there were violent clashes outside the Mestalla Stadium before Valencia's win over Barcelona.

La Liga president Javier Tebas said both incidents were a "step back."

Espanyol said they were investigating "incidents of a racist nature uttered by a few against Inaki Williams".

In a statement, the Barcelona-based club said: "Espanyol strongly and explicitly condemns any sign of racism on soccer fields."

It has been reported that Williams told Athletic captain Iker Muniain about the abuse, who then informed referee Jose Sanchez Martinez.

"No black player or any player ever wants to hear that," Williams told the Athletic Bilbao website after the game.

"It's completely out of order, people should go to matches to enjoy themselves, to support their team; football is a team sport and should be played in a friendly atmosphere.

"It's a sad day because of these incidents which have no place in football."

The tweet translated reads: "It is very sad that today we continue to experience racism scenes in football. We have to end it among EVERYONE. Thanks for your support."

Williams, who was the first black player to score for Athletic in 2015, took to Twitter after the game to add: "It is very sad that today we continue to experience racism scenes in football.

"We have to end it among everyone. Thanks for your support."

Valencia condemned the scenes outside their stadium before Saturday's 2-0 win, which saw fans throw chairs and flares at each other.

The club said those involved had "nothing to do with the values ​​of the club".

There was also fighting outside Espanyol's Estadio Cornella-El Prat before their game, which was condemned by both clubs.

Tebas later tweeted: "Today we have taken a step back in the work which we began years ago. The violence in Barcelona and Valencia and the racist insults towards Inaki Williams do a lot of damage to Spanish football.

"La Liga assumes responsibility and together with clubs we will try to find out what has gone wrong."