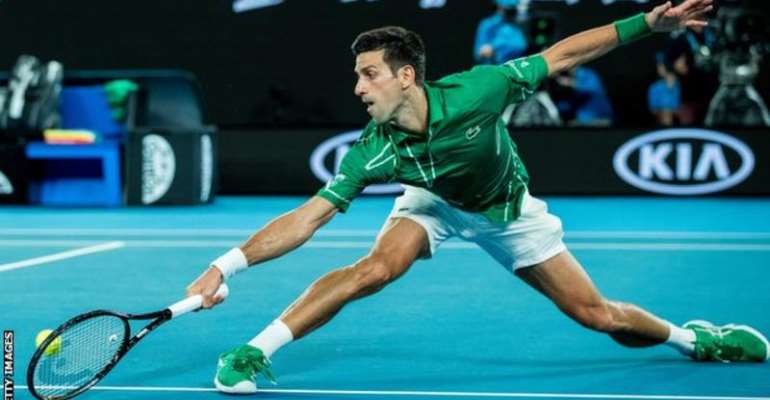 Djokovic is a seven-time champion in Melbourne and is bidding for his 17th Grand Slam title overall.

It is the first time that Djokovic has dropped a set in the opening round of the Australian Open since 2006.

However, he saw off a tiring Struff in two hours 20 minutes to set up a second-round meeting with either Japan's Tatsuma Ito or Indian lucky loser Prajnesh Gunneswaran.

The Canadian 13th seed was warned by the umpire for throwing his racquet down and responded: "I'm not breaking any rules.

"It's my racquet I can do whatever the hell I want with it. What are you talking about, I didn't break it.

The rules state that players cannot "violently or with anger hit, kick or throw a racquet" within the tournament site.

Speaking after the match, Shapovalov admitted he had been nervous during the match but said the call from the umpire was "horrible".

"I'm going to get fined for whatever the code was and he gets off the hook because he makes a call because he feels like it," he said.

"I think it was a terrible call. The racquet was still intact and he gave me a warning because I did it two or three times."

The 38-year-old, who is chasing a 21st Grand Slam title, will face the winner of French qualifier Quentin Halys against Serbia's Filip Krajinovic in the next round.

"I am very happy. It is nice to be back here in Australia. I felt really good, so it was a really good first round for me," Federer said.

"I trained really hard [between seasons], needed some vacation. I am just so happy I didn't have any setbacks. That sets you up nicely for the season."

Earlier, Greece's Stefanos Tsitsipas, who ended Federer's title defence in Melbourne in 2019, made light work of his first-round match against Italy's Salvatore Caruso.

Sixth seed Tsitsipas breezed past his 95th-ranked opponent 6-0 6-2 6-3 and will face Germany's Philipp Kohlschreiber next.

A number of first-round matches that were set to take place on the outdoor courts were cancelled because of rain.