Serie A: Ibrahimovic Comes On As Substitute On Milan Return 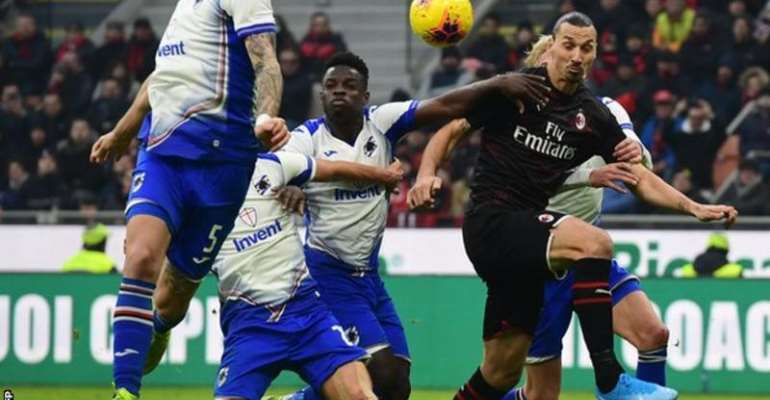 Zlatan Ibrahimovic came on as a second-half substitute in his first game since returning to AC Milan as his side were held to a goalless draw by Sampdoria.

The 38-year-old Swedish striker, who helped Milan win Serie A in 2010-11 and has signed a six-month deal, replaced Krzysztof Piatek after 55 minutes.

Ibrahimovic had two headed chances but one was cleared off the line and the other was saved by Emil Audero.

The result leaves Milan 12th, four places ahead of Sampdoria in 16th.

Sampdoria had chances to win the game but former Southampton striker Manolo Gabbiadini shot wide from the edge of the penalty area after he had taken the ball around goalkeeper Gianluigi Donnarumma.

The visitors thought they had opened the scoring in the first half when Jakub Jankto put the ball into the net but he was ruled offside.

Ibrahimovic has scored 122 Serie A goals for Inter Milan, Juventus and AC Milan and won six Serie A titles, although two successes at Juventus were subsequently removed by the Calciopoli scandal.

He left Major League Soccer side LA Galaxy when his contract expired at the end of 2019 and scored in a training-ground friendly against lower league Rhodense on Friday, which Milan won 9-0.

Meanwhile, vandals in his home city Malmo have toppled a statue of the player because he invested in another Swedish club, Hammarby, last year.