Mikel Arteta: Arsenal Manager Insists He Is Ready And Calls For New Energy 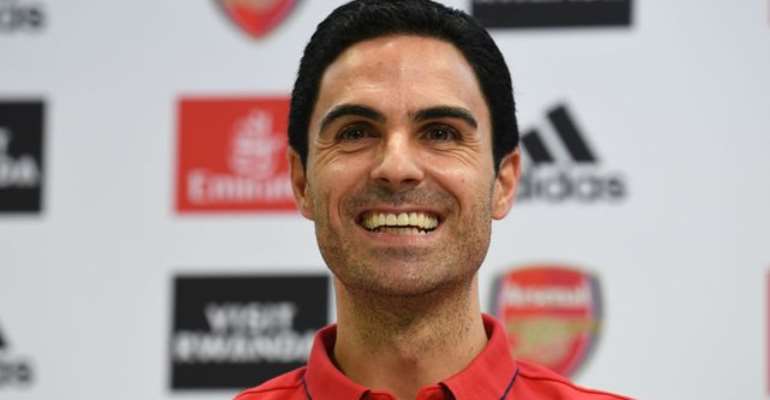 Arsenal manager Mikel Arteta says he must change the "energy" at a club he feels have lost their way since he left after retiring as a player in 2016.

Arteta, 37, has signed a three-and-a-half-year contract to succeed Unai Emery, who was sacked in November.

He has served as an assistant coach at Manchester City but has never managed.

"I have so much respect for this club, if I didn't feel I am ready and prepared for this I wouldn't be sitting in this chair," Arteta told reporters.

"It was always a dream for me. The day I made a decision to leave this football club I said to the people that I am going outside, I am going to learn, get prepared and hopefully one day I can come back here when I feel I am ready.

"I have been preparing for a few years for this challenge to come. I know the expectations, level and stature of this club and what it deserves. I am ready for that challenge.

"They were so convinced they wanted me that I said I have to take the challenge."

'Energy' a number-one priority
Arteta served as club captain and won the FA Cup twice in a five-year playing career with the Gunners.

The Spaniard takes charge from Sunday, leaving Freddie Ljungberg in interim charge for the trip to Everton - another of Arteta's former clubs - on Saturday (12:30 GMT kick-off).

Arsenal sit 10th in the Premier League following a home defeat to Manchester City last Sunday when Arteta was in the dugout for the visitors.

"The first thing is to change the energy," said Arteta. "Last week I was here and felt a bit down. I have to get all the staff and everyone with the same mindset.

"We have to build the right culture. It's my job to convince everybody that this is how we are going to live.

"Now we need immediate impact, to win games, raise the level of confidence and we need the fans. We need to engage them, transmit with our behaviours what we want to give to this club. We need to plug these two things together as it's so powerful."

City tears and a culture change
Arteta said he "cried" when he said farewell to colleagues at City and stressed he needs a "proper conversation" with Ljungberg over his own future.

When he takes charge for the Boxing Day fixture at Bournemouth, he will become Arsenal's youngest manager since Terry Neill, who was 34 when he led the Gunners in 1976.

Arsenal won the FA Cup in the season after Arteta departed but the 2016-17 campaign saw them finish outside the Premier League's top four for the first time since 1996.

Asked if the club had lost its way in recent seasons Arteta replied: "That's what I am sensing from the outside. I would like to start to understands the reasons why. I have to try to understand quickly why this is to implement certain things that will be quick wins. We have to create the right vibe.

"The ambition of this club is clear - you have to be in Europe and fight for trophies. The rest is not good enough.

"I want people who deliver energy and passion to the club. Anyone who doesn't buy into this has a negative effect or whatever, is not good enough for this environment and culture."

'They are in relegation form - it really is that serious' - analysis

"The jury is out. He has never managed before, it's a huge job and it's a massive show of faith from the Arsenal board who are clearly very impressed with him.

"He's someone who has always had an eye on management and has been working with the professor for the last three seasons. Pep Guardiola is a remarkable manager, I believe he is the best the game has ever seen, but to do it on his own is a different matter.

"There are so many problems he needs to sort out at Arsenal. He is going into a situation where Granit Xhaka has lost the captaincy, there's the Mesut Ozil situation to solve and the way they are so disjointed on the pitch. He will be aware of the way City punished Arsenal last weekend.

"I think they have always felt he is the person but it's a huge expectation that he will carry at that club and he will know in the first few games what that is about. He is not going into an easy situation. He has to turn this club around. The belief has gone and they are in relegation form - it really is that serious.

"There's an awful lot of work to do. If he fails, we'll say that was obvious, he didn't have the experience. If he's successful, he could be in the next line of those outstanding managers."

"He is a rookie manager, so that's a gamble that Arsenal have taken - but I was very impressed with his news conference, the positivity and self-confidence.

"It's a new start and it's a start that I want the players to embrace as well because the players need to have a hard look at themselves. They haven't behaved the best in the past year or so, because where we are in the league is down to the players.

"I think the players need guidance, maybe with a lot of shouting because I think it's been a little bit too easy recently.

"The defence needs looking at seriously because it's been like that for a good two or three years. We're still looking for a tough, really strong holding midfield player, so hopefully, those guarantees have been made to him and he can execute them in the next few transfer windows."