UCL: Bayern Munich Make It Six Out Of Six With Win Over Tottenham 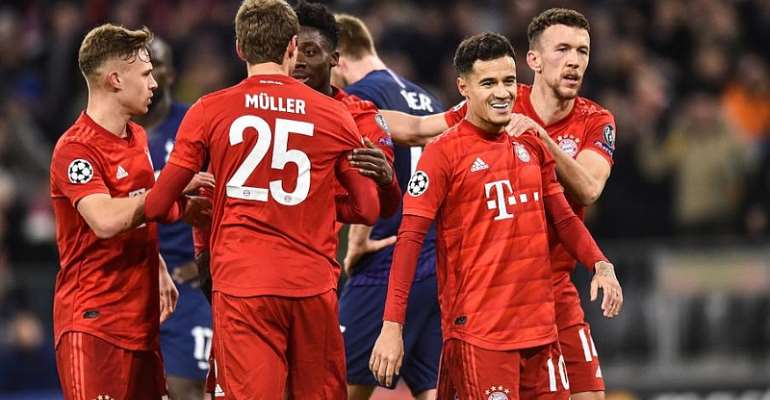 Bayern Munich on Wednesday became the first German club to win all of their six group matches in the Champions League when they swept to a 3-1 home victory over Jose Mourinho's Tottenham.

Both sides had already made sure of their progress to the last 16, but victory would have been a relief to caretaker-coach Hansi Flick after the German giants had lost their last two Bundesliga games.

Kingsley Coman, who suffered two ankle injuries in 2018, put Bayern ahead at the Allianz Arena before needing to be helped off on 27 minutes after badly twisting his knee.

With an hour gone, Philippe Coutinho bagged Bayern's third goal by firing an excellent shot into the far corner of the Spurs net.

"(We) really wanted to win to confirm to ourselves that what we are doing is right," said Mueller. "Sometimes we were a little unlucky."

"We can only cross our fingers for Kingsley, his injury didn't look good at all," Mueller added of Frenchman Coman.

Bayern ran riot with a 7-2 thrashing of Spurs in north London when the clubs last met in October, but this was a far more subdued affair with both teams resting their star strikers.

As he had hinted Tuesday, Mourinho rested several stars with Lucas Moura taking the place of England striker Harry Kane.

"I would have preferred a different result, but I am happy about the information I have learnt about the players I used," said Mourinho.

"I am happy with the decisions I made and I hope the supporters understand that," he added, after Dele Alli also did not make the trip to Munich.

The hosts went ahead on 13 minutes when Serge Gnabry spotted Coman unmarked to sweep the ball in and score his first Bayern goal for nearly three months.

However, Spurs drew level on 20 minutes when winger Sessegnon fired home the visitors' first clear chance to claim his first goal for the club since joining from Fulham.

Bayern then lost Coman, who was in clear distress after twisting his knee and had to be helped off.

Spurs midfielder Moussa Sissoko squandered a great chance when he got in behind the defence, but overhit his cross with Sessegnon unmarked on the far side.

Gnabry then hit the woodwork for Bayern and just before the break, left-back Alphonso Davies hit the post, but Mueller was on hand to tap home the rebound.

Coutinho then netted his first Champions League goal since joining Bayern on loan from Barcelona when he picked his spot in the far corner in the 64th minute.