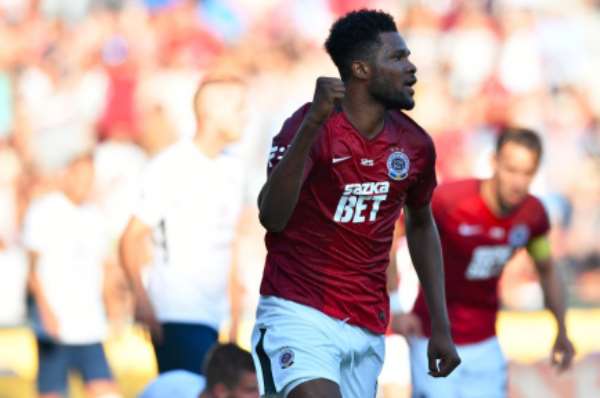 Ghana u-23 forward, Benjamin was named in Sparta Prague’s starting eleven to face Mlada Boleslav on Sunday afternoon and enjoyed a good day at the office as he got his name on the scoresheet.

In a pulsating match week 19 fixture of the Czech First League played at the Generali Stadium, the home side cruised to a deserved 5-2 victory even though they had to work for it.

A good start to the match saw Sparta Prague taking a two-goal lead after just 9 minutes of action when Michal Sacek and Martin Hasek found the back of the net to unsettle the away team.

Mlada Boleslav quickly regrouped and halved the deficit on the 26th minute when Lukas Budinsky found the back of the net.

That goal gave them the confidence to push on until they finally restored parity on the 53rd minute courtesy a fine strike from Pavel Bucha.

Sensing danger, Prague also upped their game instantly and replied with a goal of their own through Guela Kanga. Now in the driving seat, they dominated the match and finally got an insurance goal on the 71st minute after Ghana’s Benjamin Tetteh had found the back of the net.

A late own goal from Michal Hubinek completed the 5-2 resounding win for Sparta Prague on the day to push them to 3rd on the League standings.

Tetteh, 22, lasted 73 minutes of the match before his place was taken by Libor Kozak.