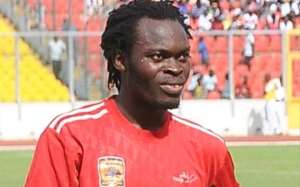 Experienced Ghana Premier League striker, Yahaya Mohammed has urged Asante Kotoko to load FC San Pedro with goals when they visit Kumasi this weekend for the first leg of the final qualifying round to the group stage of the CAF Confederations Cup.

The two clubs are billed for a crucial two-legged encounter in the next week to battle for a spot in the group phase of the continent’s second-tier inter-club competition.

After being knocked out of the CAF Champions League by Etoile du Sahel, Kotoko is determined to make amends by beating the Ivorians to ensure their campaign in Africa continues.

Sharing his thoughts on the upcoming match, Aduana Stars captain, Yahaya Mohammed has cautioned the Porcupine Warriors to make sure they score more goals at home.

According to him, FC San Pedro takes every game as a final and hence they cannot be underestimated.

“They (FC San Pedro) take every match as a final match including friendly matches.

“Kotoko must beat San Pedro by more than two goals if they want to progress to the next stage of the competition.

“They know how to play away matches so Kotoko should not underestimate them”, the former Kotoko striker said in an interview with Kessben FM.

The first leg of the fixture between Kotoko and FC San Pedro will be played on Sunday, October 27, 2019, at the Baba Yara Sports Stadium.