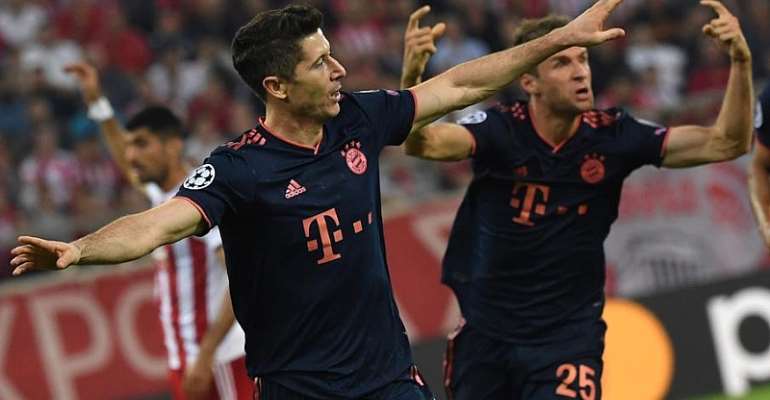 Bayern Munich captain Manuel Neuer could not hide his irritation after the Germans needed two Robert Lewandowski goals to dig themselves out of trouble in their 3-2 win at Olympiakos in the Champions League Tuesday.

Lewandowski maintained his phenomenal record, scoring for his 12th game in a row, to leave him with 18 goals in 13 games in all competitions so far this season.

After Youssef El Arabi had given Olympiakos a shock lead in Athens, Lewandowski poached goals, both after good work in the build-up from Thomas Mueller, to turn the game before Corentin Tolisso grabbed a third with a superb strike.

Worryingly for the defending German champions, Olympiakos again beat Bayern goalkeeper Neuer late on when Brazilian midfielder Guilherme hit the back of the net in a tense last ten minutes.

"We made life hard for ourselves again," Neuer said as Bayern had failed to win their two previous Bundesliga games.

"We need to play more like ourselves again and every single player must produce a better performance.

"The problem is that we always need to score three goals as we have again conceded twice," he moaned, referring to Saturday's 2-2 draw at Augsburg and the 2-1 shock home defeat to Hoffenheim in early October.

There was unpleasant news before kick-off in Athens when the Uefa Youth League match between Bayern and Olympiakos was abandoned with the Germans winning 4-0 after a masked gang attacked visiting fans with clubs leaving at least seven people injured.

The Greek hosts can expect a hefty fine from Uefa, but the away win could have also cost Bayern a second centre-back in three days.

Lucas Hernandez was helped off with an ankle injury after Niklas Suele was ruled out for at least six months after tearing his cruciate ligament on Saturday.

"Lucas has strong pain on the inside of his ankle," Bayern head coach Niko Kovac told Sky with the club suspecting a ligament injury.

Midfielder Javi Martinez also failed to start the second half with a thigh injury.

This was Bayern's third straight win in Europe to leave them five points clear at the top of Group B ahead of Tottenham Hotspur, who won 5-0 at home to Red Star Belgrade, while Olympiakos stay bottom of the group.

Mueller had started the previous eight games on Bayern's bench, but the Germany star was finally named on the right wing and made his point with both assists for Lewandowski.

After their dazzling 7-2 thrashing of Tottenham in north London three weeks ago, this was a much less convincing performance from Bayern at the Stadio Georgios Karaiskakis.

After El-Arabi's header beat Neuer at the far post, the hosts almost got a second goal when Hernandez got a foot to a Kostas Tsimikas cross, which was heading towards goal before Neuer intervened.

Olympiakos' lead lasted 11 minutes as Mueller blasted an acrobatic volley which was blocked by goalkeeper Jose Sa, but Lewandowski pounced to fire home.

It was 1-1 at the break, but the Poland star put Bayern ahead when he stabbed home from close-range after Mueller had a shot blocked with an hour gone.

Tolisso, a halftime replacement for Javi Martinez in central midfield, then curled home a superb third for Bayern on 75 minutes from long range.

Guilherme allowed home fans to dream four minutes later with a similar thunderbolt shot from distance after poor defending which beat Neuer to narrow the scoreline.