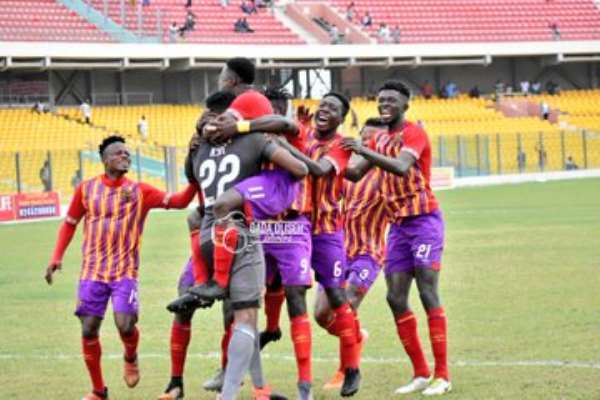 Hearts of Oak triumphed over regional rivals Great Olympics on Sunday, October 20, 2019, after a penalty shootout to ensure they won the 2019 edition of the Homowo Cup.

The two top teams from the Region locked horns at the Accra Sports Stadium as part of activities earmarked to celebrate the Homowo festival.

The match which was a replay of the fixture after a goalless draw between the two sides at the same venue a couple of weeks ended 1-1 at the end of 90 minutes to send it into penalties.

Phobia prodigy Michelle Sarpong opened the scoring for his side before Iddrisu Sarlar pulled parity for Great Olympics.

Kim Grant’s rainbow army enjoyed success in the shootout while winning 3-1 to ensure they were crowned champions at the end of the day.

Below are some pictures from the Accra Sports Stadium highlighting celebrations from the Phobians.

Ken Agyapong is only brave on NET2 TV but actually a coward ...
11 minutes ago