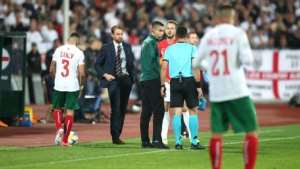 Bulgarian Prime Minister Boyko Borissov has called on the president of the country's football union (BFU) to resign following racist abuse that marred the Euro 2020 qualifier between Bulgaria and England on Monday.

England beat Bulgaria 6-0 but the match was temporarily halted twice during the first half in order to warn supporters that the match could be abandoned following racist chanting in the Vasil Levski Stadium.

"I urge Borislav Mihaylov to immediately resign as president of the Bulgarian Football Union!" Boyko Borissov posted on Facebook on Tuesday.

"It is unacceptable for Bulgaria, which is one of the most tolerant countries in the world, and people of different ethnicities and religions live in peace, to be associated with racism and xenophobia."

The BFU was not immediately available to comment. However, after Monday's match, it tried to play down the incidents.

"It's quite disappointing to focus on racism," BFU vice-president Yordan Lechkov said. "It's not serious to concentrate on that if there's a qualifier like this and we're playing against a team like England."

UEFA had ordered the BFU to partially close the Vasil Levski national stadium for England's visit after supporters were found guilty of racist behaviour in matches earlier this year.

Bulgaria supporters in the crowd were seen directing monkey chants at England players, doing Nazi salutes and holding up shirts with the UEFA logo and the text "No Respect" -- a reference to the European governing body's "Respect" campaign aimed at curbing racism in the sport.

The chanting was heard from the stands and reported by England players to manager Gareth Southgate, with the referee informed and a public announcement made on two occasions.

Bulgaria captain Ivelin Popov spoke to a section of the supporters at half time and said afterwards that his team were affected by the chants.

"[England] heard racist chanting in the first half and told the referee," he told NOVA TV. "I spoke a few times with the security in the South Stand, to try and stop them.

"We are affected by that. At the half time we spoke with the officials and England squad about whether to play the second half. Gareth Southgate thanked me because I tried to do something."

Bulgaria manager Krasimir Balakov said there had not been such racial incidents before and blamed England fans for being disrespectful to Bulgarian supporters.

"During the second half they used words against our fans which I find unacceptable," he said.

The BFU and a number of Bulgarian clubs have been fined by for racist abuse several times over the past few years.