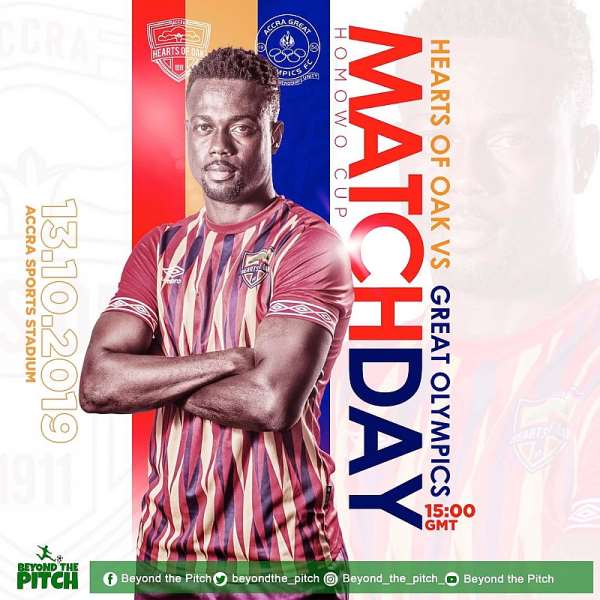 Glorious Accra Hearts of Oak will aim to confirm their dominance over city rivals Great Olympics when the two capital clubs go head-to-head for this year's Ga Homowo challenge Cup trophy on Sunday.

The game will come off at the Accra Sports Stadium and, is expected to be graced by the chiefs and elders of the Ga Traditional Council as they climax the 2019 Homowo festival celebrations.

The rivalry between the two clubs dates back decades with the Phobians holding the majority of the wins over their neighbours who now ply their trade in the second tier of Ghana football.

Hearts' coach Kim Grant will hope his charges will step up to this challenge having prepared them all week for this encounter and, they should be in high spirits as they go in search of a first trophy in their new Umbro shirt.

Expectations of their fans will be very high on Sunday as they always demand a result from their boys no matter the occasion.

Great Olympics has been very noisy in the build-up to this game claiming that they are the 'Lord's' of the capital and, will be out to prove that in their new Strike kits.

The Dade Boys will want to pull a fast one on their more illustrious rivals who have dominated encounters between the two sides in recent times.

The most recent meeting between the two was in the 2016/17 season when the Wonder Club were relegated from the topflight despite their last minute heroics in their attempt to stay up.

Hearts claimed back-to-back victories over Olympics that season, and, the Phobians will be odds on favourites to take home the 2019 Ga Homowo Challenge Cup trophy.

The battle lines are therefore drawn with the stakes very high for both sides as they seek to claim ownership of the capital and with it, the trophy and money on offer and all the bragging rights it comes with.