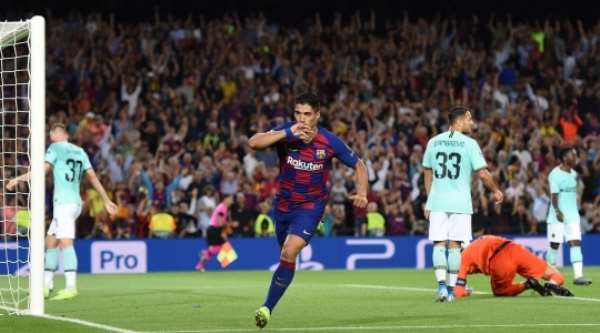 Ghanaian defender Kwadwo Asamoah lasted 90 minutes on Wednesday night but unfortunately suffered a 2-1 defeat with his Inter Milan side at the hands of FC Barcelona at the Camp Nou in the Uefa Champions League.

The two European giants locked horns in a match day 2 encounter in Group D with the sole aim of amassing all 3 points after drawing their respective opening matches of the competition a fortnight ago.

The Nerazzuri’s opened the scoring just 3 minutes into the game courtesy a strike from striker Lautaro Martinez. The Argentine received a pass from Alexis Sanchez and powered his shot into the back of the net.

Kwadwo Asamoah who started the match for Inter Milan helped the away side to defend the lead and managed to go into the break with the lead still intact.

After resuming the second half, a more purposeful display from the Catalans gave their fans hope of getting something at the end of 90 minutes.

Two minutes to hit the hour mark, Luiz Suarez restored parity for Barcelona with an assist from the experienced Arturo Vidal.

The Uruguayan found the back of the net again to complete his brace with 6 minutes to end proceedings. This time around it was Lionel Messi who assisted the goal to hand Barcelona all points.

Kwadwo Asamoah who was deployed at the left-wing-back position played the full throttle and impressed throughout even though his side returns to Milan with no point.