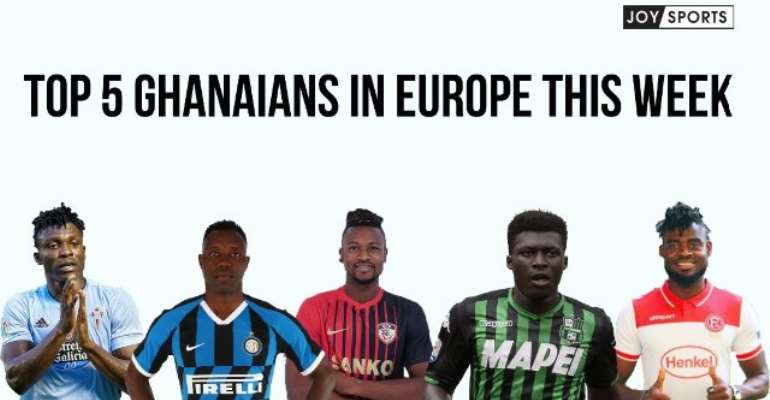 With the return of the Champions League and Europa League, the games are coming in thick and fast. Nonetheless, Joy Sports has been keeping an eye on Ghanaian players across Europe over the weekend, highlighting the top five performers.

Inter Milan maintained their 100% start to the Serie A season with a 2-0 victory over AC Milan at the San Siro on Saturday.

Asamoah was once again ever-present on the pitch, with his total amount of minutes this term stretching to a maximum 450 minutes from five competitive games.

He made 47 passes and had an impressive accuracy of 85.1%, while drilling in three crosses. On the defensive side, he made two interceptions, two clearances and contributed to yet another clean sheet.

Despite suffering an injury in the 64th minute, Aidoo played through the pain barrier and completed the match against Atletico Madrid which ended in a stalemate.

Aidoo, 23, was terrific all match as he managed a 94% pass success rate, won one tackle, and also won two aerial duels at the Wanda Metropolitano.

The former Genk defender ensured that Diego Costa’s poor run of not managing a single shot on target so far in La Liga continues.

The Gazisehir Gaziantep BB striker continued his fine start to the season as he scored in his third consecutive match for the Turkish side.

He scored the opener this week for Gazisehir Gaziantep BB as they defeated Joseph Attamah’s Rizespor 2-1.

Twumasi will be hoping to sustain his form in order to boost his chances of becoming a household name in the Ghanaian national team.

The combative midfielder got his first goal of the season for Sassuolo as they demolished SPAL 3-0.

The former Inter Milan man had already provided three assists in two games for Sassuolo prior to the game against SPAL.

The 26-year-old stabilised the game, allowing his team mates to flourish in attack.

The man on loan from TSG Hoffenheim scored his first goal for Fortuna Düsseldorf in the German Bundesliga.

The 26-year-old powered a header in the sixth minute to give Fortuna Düsseldorf the lead away from home against Borussia Mönchengladbach.

Düsseldorf couldn’t hold on to their lead as they lost 2-1, however, Nuhu was brilliant as he earned a lot of praise from the fans after the game.

The Black Stars international has now made two successive appearances in the Bundesliga for his new club after recovering from injury.